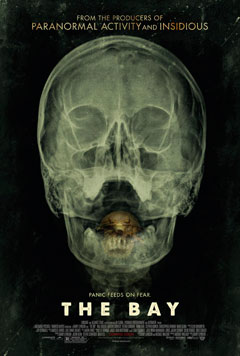 Great! Here’s another movie to make me extremely paranoid even if it’s very unlikely!

The Bay starts with a lot of dead fish. Or rather, it starts with Donna Thompson (Donohue) recalling what happened during the Fourth of July celebration on a Chesapeake Bay town on Maryland, USA. Due to a series of bad decisions from the authorities, from Mayor to Homeland Security, the poor unsuspecting people of the town are about to suffer their worse Independence Day ever, when a plague of mutant parasites attack them through the toxic water of the bay, and unleash chaos and body horror. And you can watch all that through all the different cameras documenting every single horrible happening!

I like the found-footage genre. The movies themselves are hit or miss, but the style is something I appreciate. The only con is, because of the genre itself they need new/unknown actors, and sometimes they suck. Am I saying the actors in The Bay suck? Actually, no. They weren’t great, but they did their job fairly well, and you could believe these were real people recording and being recorded during a terrible situation. Every person of this ill-fated town was depicted in a way that made their confusion and horror very real. Even the useless guys at the CDC where good at realizing how useless they were and how hopeless the situation was. The only part that was slightly not-so-great to watch was the “present” Donna recalling what had happened via Skype.

I admit that the fact that The Bay was directed by Barry Levinson interested me a lot. Sure, Paranormal Activity and Insidious were decent horror movies, so kudos to the producers for working more decent horror movies. But holy shit, this guy directed Rain Man! And now, he has made a very coherent mockumentary, cleverly using “different sources of footage” to create a convincing story. I was very aware of the artistic licenses as far science was concerned; but it still it made me paranoid about swimming near the coast, angry about useless authorities, and despairing for the fate of the townspeople.

The Bay didn’t really had a pay-off, things concluded off-camera, and it wasn’t that subtle about being a critique about contamination and negligence; but it felt very “adult” in its horror. Specially when watching either the few people who were aware how in deep shit they were, recording what they knew were their last moments alive; or those poor unfortunate souls who walked into that nightmare when things where already in motion. That’s something I can appreciate.