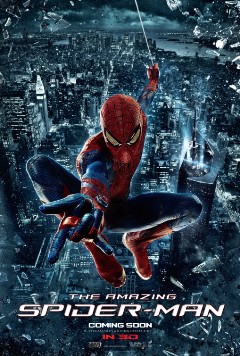 From a business standpoint, Sony had to develop another Spider-Man film in order to not lose their rights back to Marvel. However, the studio also decided to reboot the franchise with a different cast (and director) because, despite being very profittable, Spider-Man 3 fucked it up (story-wise and character-wise) to the point where it was nearly impossible to imagine a fourth film happening under Sam Raimi’s direction.

In The Amazing Spider-Man, we get to see (again) how Peter Parker (Garfield) became Spider-Man and how he deals with his newfound powers and responsabilities as well as his relationships with his uncle Ben (Sheen), aunt May (Field) and his love interest Gwen Stacy (Stone).

The new version of Peter Parker is actually shown as a smart person. Not only does he develops his organic web-shooters on his own, but he also helps his father’s friend, the one-armed Dr. Curt Connors (Ifans), by solving an equation that is vital for his research regarding limb regeneration. However, an accident with Connors’ investigation leads him to become the Lizard and it’s Spider-Man to the rescue before the city turns into chaos.

Unlike the Raimi films, Marc Webb’s The Amazing Spider-Man comes across as a visually darker film driven by human emotions and scientific touches thanks to the direction and the screenwriting team. While the film still retains familiar elements from 2002’s Spider-Man, the new film manages to not only refresh the franchise by further exploring Parker’s past, but the writing firmly established the characters and their relationships.

Andrew Garfield’s performance as Peter Parker was pretty good and interesting to watch. He played Peter as a teenager with energy, swagger, smarts, humor and vulnerabilities. Garfield also has excellent chemistry with Emma Stone as Gwen, who did a lot more as Parker’s original love interest from the comics than Kirsten Dunst did as Mary Jane Watson in the Raimi trilogy. Stone’s Gwen was smart, fun and charismatic to watch. For those who watched Webb’s debut film, (500) Days of Summer, it shouldn’t be a suprise that Peter and Gwen’s relationship was well done.

The supporting cast was solid. Martin Sheen and Sally Field were great at pouring human emotion into Ben and May Parker, respectively. It was awesome to see uncle Ben getting more screentime despite his doomed destiny. Rhys Ifans was pretty good as Connors, whose dream of repairing his arm and trying to create a world without weakness ended up turning into a quest for perfection (in the wrong way). Denis Leary, who played a police officer and Gwen’s father, had some good moments when he dealt with both Peter and Gwen. Irrfan Khan, who played Dr. Connors’s pressuring boss, ended up being the catalyst for the Lizard’s birth. Also, it was nice to see Flash Thompson (Zylka) being more than just your typical jock.

My only complaint here was the amount and execution of action scenes, and this isn’t because they were designed for 3D. The action scenes in here could have been polished better to provide more thrills and help make Spider-Man stand out as a hero [see: Spider-Man 2]. But I can overlook that because the acting, writing, details and direction makes The Amazing Spider-Man — the second best film of the Spidey films — stand out for not being your typical superhero film at all.