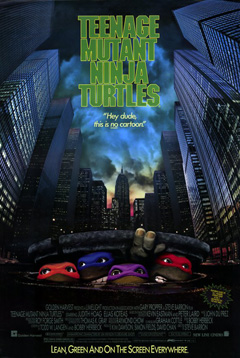 Damn it, political correctness! What have you done to me!? You know what was my first thought after finishing my first watch of Teenage Mutant Ninja Turtles in ages? It wasn’t “my gosh, turtles are so freaking cool!” No, the first thing that I thought of was “why do the only two main Asians in the film are REALLY bad guys?”

Today I had babysitting duties with my nephew. He’s a little unruly, but for some reason he came up with the idea of “Ninja Turtles” and I had this one come in handy. First of all, I was a little impressed with the darkness of the atmosphere. My nephew even said “this looks like a grown up’s movie.” It’s not even funny how sanitized family entertainment has become. This one sure seems serious with a setup that shows the ever growing crime rate taking over New York, juvenile delinquent pickpockets, vandals and thugs stealing your electronics — before delinquents could snatch smartphones and expensive digital cameras, they used to snatch boomboxes, radios and maybe chunky TVs from ladies in their apartments.

The whole setup, of course, went over the 5-year-old’s head. He wanted to see fighting turtles, and when our female reporter April (Hoag) is about to be mugged, the lights go out when the turtles do their ninja business. I told the kid he had to pay attention or he would miss them, and then he saw them… the little masked eyes beneath the manhole. It’s the moment you sneak a peek and your kiddie heart skips a beat thinking there really could be “something” living beneath your street.

The plot in Teenage Mutant Ninja Turtles is rather simplistic; the turtles are teenagers so they have some personality clashes, especially Raphael (in turtle suit and voiced by Pais) who seems to brood all the time (I was totally Raphael). Their master Splinter (Clash) wants the turtles to focus to become better fighters, but you know Michaelangelo (Rist)- he can’t help himself. When April gets in too deep with her reporting of the crimes in the city, linking it all to an Asian crime organization (see what I’m saying) known as Foot headed by Tatsu (Obata). Little do they all know that behind it all, there’s a darker force known as Shredder (Saito).

Besides the whole “these Asian men corrupting our youth (especially the Caucasians)” business, I had a problem with the inclusion of Casey Jones (Koteas) who is just inserted into the storyline. He’s really not needed when he’s introduced, and even though he shows up to “save the day” and he’s a hero, all the saving could have been accomplished with some other plot device. And even though Shredder was EVIL, I was a little taken aback by the fact that Casey kind of meant to kill Shredder for real. Splinter didn’t drop him from the building, Shredder cut himself loose, but having Casey turn on the shredding on the garbage truck was a little to casually dark.

Having said that, Jim Henson’s turtles are SO FREAKING COOL. You may be able to get better fighting sequences and action shots with CGI, but they will never be as cool as seeing the turtles “in the flesh” — especially if you were visiting Universal in the 90s. Of course, this is in part of Barron working with Henson for The Storyteller (he directed three episodes), the visuals and direction is here on this one, but the script is a bit of a chunky mess. Still quite fun, though. But the little heart in grown-up me was broken a little.