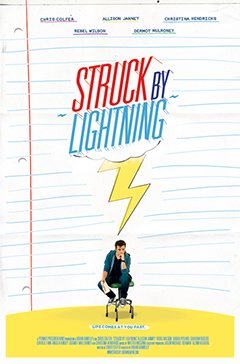 You know when you’re in high school and you feel like yelling at everybody around you for being so stupid, and then a few years later you realize that maybe yelling at people for being stupid is a little immature? Struck By Lightning is what happens when you don’t grow past that phase and make a movie.

Chris Colfer stars as Carson Phillips, an aspiring journalist who hates everyone around him because they all fall into the neat little stereotypes he’s imagined for them. He decides to start a literary journal to bring up his chances of getting into his dream college, but no one wants to join. As a last ditch effort, Carson chooses to blackmail a collection of the school’s popular students in order to publish his magazine and achieve his dreams.

After an enormously entertaining debut like Saved!, one would hope Brian Dannelly would have stuck to a good path. Eight years later, we get his sophomore work: a competently made movie that, unfortunately, has an absolutely terrible screenplay. It’s a shame he didn’t choose to write another film himself because, ultimately, it’s Chris Colfer that brings this down on every level.

If Suburgatory and Glee had an uncomfortable lovechild and never bothered raising it, you’d have a good idea of what Struck By Lightning is like. Maybe Colfer watched Mean Girls once too often, or maybe Ryan Murphy’s terrible writing has seeped into his brain more than anyone deserves. As for his acting, he might as well be starring as a not flamboyant version of his character on Glee, considering they’re both vindictive, overbearing assholes, but Carson is somehow more annoying than Kurt.

Colfer centers the movie around his character and makes practically everything about him getting what he wants, even if he does get struck by lightning at the start of the movie. There’s also a subplot featuring Allison Janney, Dermot Mulroney, and Christina Hendricks all about divorce and parenting and marriage and how rough it can all be that I wish Chris Colfer had actually cared to expand on instead of making it almost all about him.

The messages that everyone has the potential for something better in them and that life doesn’t always turn out the way you hope are pretty hamfistedly shoved into the movie, and there’s a chance those ideas might actually work if the main character wasn’t a self-centered prick. Struck by Lightning has a lot of wishes to reach something emotional, but when it skims over anything remotely tragic or important for the sake of, oh wait, nothing, it’s hard to care.

A few things make this film moderately bearable and those are definitely a bunch of the minor characters. Being stuck with a character as obnoxious as Carson makes you appreciate the little things, like all those television actors we all know and love like Angela Kinsey, Allie Grant, and Ken Marino. No matter how minor their roles are, they, at least, brought some fun to the movie. And let’s not forget Rebel Wilson because even with terrible writing, she always manages to bring out a worthwhile character.

Alas, solid supporting performances and competent filmmaking doesn’t excuse poor writing, so Struck By Lightning ends up being nothing more than a try-too-hard effort from a first time writer.