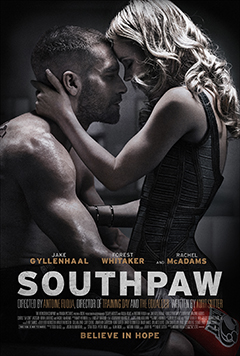 Antoine Fuqua did the film a disservice when he said Gyllenhaal needed to do “more masculine films” [1], as if Jarhead, Brothers and End of Watch weren’t “manly” enough, considering he just made Rocky for the grungy generation, which is big on the man-tears. Even Ang Lee’s Brokeback Mountain is more subtle with its sentimentality, so- is Southpaw a “more manly” film because Gyllenhaal punches people and growls?

He sure does punch people and bleeds a lot, playing champion boxer Billy Hope, who loses everything that mattered to him [as spoiled by the first trailer]. It’s a basic script; there’s, however, a wonderful tense chemistry between Gyllenhaal and his on-screen daughter, Leila (Laurence, who played the young version of Pennsatucky in the 3rd season of Orange is the New Black). If she hadn’t spent so much time off-screen, Laurence could have stolen the movie from her on-screen dad, which she almost does in their final confrontation, where Billy snaps back to reality-

I don’t even think that the results of the final fight comes close to a surprise, but there’s also a beautiful moment by the end that makes up for the predictability, which is the crippling of the common underdog story. However, these are also meant to make you feel good and happy to such extent that you’ll watch them again and again despite knowing how they all turn out to be. Southpaw really drills into Billy’s depression and poor decision-making, which we -almost- confront in a scene between Billy and new coach Tick Wills (Whitaker), who -at least- adds some much needed snarky dialog. Also, though McAdams is used accordingly, I felt Harris was completely underused.

You can see why Eminem was offered Southpaw; storytelling-wise, it can be similar to 8 Mile but with better acting, though not driven by music. Including Phenomenal [LV] as the background music while there was still dialog being said, however, was a detriment to both the film and the song, despite it being almost a second-rate Lose Yourself [MV]. You gotta admire Gyllenhaal’s dedication to the role, though.

Extra quarter for him.

Also, can we talk about the fact that this is “The first American movie to be financed solely by a Chinese company.” via Quartz