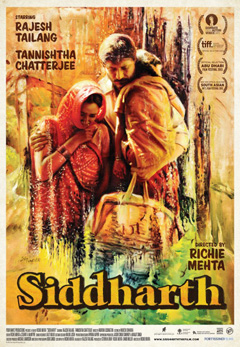 Canadian and Indian film co-productions have a rather critically successful history (with Deepa Mehta, and her Oscar nod for Best Foreign Film) compared to co-productions with the US (eg. Ra.One) or the much more usual UK ones. Richie Mehta’s Siddharth is one of those movies that make you appreciate the comforts of your life, when even access to information would make your problems seem… a little bit easier to confront.

Siddharth is a straight-forward film that follows Mahendra (Tailang) a Delhi chain-wallah (or zipper expert) that in need of money to help the family allows his twelve-year-old, Siddharth (Irfan Khan), to go to Punjab for a month-worth of work at his brother-in-law’s second cousin’s factory. Planning to return for Diwali, he never shows up, sending Mahendra and the rest of his family — wife Suman (Chatterjee) and daughter Pinky (Khushi Mathur) — into a search that could tear what’s left apart.

Every suburbia parents’ worst nightmare. Work on this and you have a double feature with De Behandeling, despite the stark differences in genres and themes. Though Siddharth borders closely to being hopelessly depressive — I’m almost convinced the ending is a level or two below Madhur Bhandarkar’s heart-wrenching Chandni Bar — however, it never falls into a pity-party of blames. It makes you question whether it’s Mahendra’s fault, whether it’s the uncle or the cousin… is it the system? It doesn’t really matter as Mahendra faces the situation, realizing that never in his son’s twelve years of life he’d ever taken a single picture of him, or worse… after just a few months, the face of his son is starting to fade from his memory.

There’s a point near the first 30min. when Mahendra gets his first solid clue as to where his son might be found, and he spends a big amount of time trying to follow up on that until he finally finds someone who grabs their phone and googles the answer right away. It seems inconceivable but you’ll realize how blessed you are for having easy access to the power of information, which we constantly take for granted. It’s a simple scene, but it carries so much, lifting a weight from Tailang who carries around a heavy heart throughout his whole performance, reaching breaking point when he informs his own father.

Mehta tries to make the ending work with a certain sense of hope, despite the results… all the sacrifice, the communal help, the borrowing of money and the prayers, they don’t work out the way they were expecting; just like all the sacrifices didn’t work out for Mumtaz in Bhandarkar’s heroine’s journey at all, but at least it shows us a glimmer at the end of that scary dark tunnel.