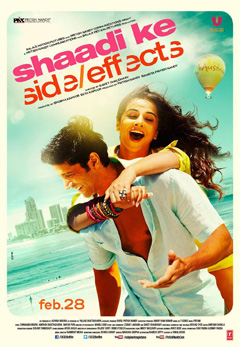 Meet Siddharth (Akhtar) and Trisha (Balan), they’re spicing up their marriage role-playing at fancy hotels to the incredulous view of the marriage-riddled manager. They hunger for each other and can’t keep their hands away for too long, at least when they’re on character. It doesn’t take long for Sid to get that dreaded “I think I’m pregnant,” from Trish. Forget the career prospectus- Trisha’s possible promotion is off the agenda, and Sid’s solo debut album gets delayed in favor of jingles that pay the bills, while tension keeps building for the once-in-love couple.

I don’t seem to be a big fan of Chaudhary’s type of humor- I see it and think “oh, yes, this should be funny,” but I don’t burst out laughing. It happened a lot on his debut, and it kept happening here. When Sid gets ‘found out’ by the hotel manager, you’re supposed to laugh, instead I projected myself to Phil and Claire’s spicing-it-up night out gone wrong on Modern Family which did had me cackling. However, don’t get me wrong, I liked the first half of the film- it actually works as a pretty decent light drama on the woes of parenthood and how that takes its toll on relationships that were solid. Akhtar and Balan are also likable leads and great actors, but for something that was sold as a comedy, there was no comedy flare, which I know Vidya can pull off because she was hilarious in Ghanchakkar… despite its own messy resolution.

While Shaadi Ke Side Effects succeeds in making us (girls… or maybe just baby-hating me) sympathetic towards Sid’s parenting foes against some of the most outrageous motherly requests from Trish, the storyline starts to get a little out of hand after the intermission when we’re introduced to even more characters, and even gives you one last explosive announcement by the end just for the sake of surprise. It makes for a long road when it doesn’t need to be. Then again, I have that issue with all masala films. Though I’m sold on it at times, I can’t fully get used to it.

Overall, I was expecting a bit more from Farhan and Vidya.

Random observation. This is THE first time that I’ve seen a father being thrilled to have a baby girl in an Indian movie, despite the whole unhappy marriage when the baby arrives setting.