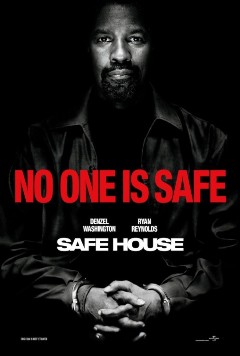 Denzel Washington and Ryan Reynolds co-star in Safe House, a conspiracy film in which no one is safe.

Safe House takes place in South Africa and follows Matt Weston (Reynolds), a rookie agent whose job is to guard a CIA safe house. After months of babysitting the empty house, the CIA finally uses the secret place to bring in Tobin Frost (Washington), the CIA’s most wanted rogue agent, to interrogate him about private information that he possesses.

However, the house is ambushed by mercenaries that want Frost. With all the CIA members gunned down, Weston has no choice but to flee with Frost and follow the CIA protocol: stay out of sight from the enemy until they can reach another safe house.

We have seen the things Safe House presents in previous films before, most notably in the Bourne series. Corrupt government, plot twists, betrayals, action-packed scenes and character changes are present in this film. But I have to admit that using South Africa almost entirely as the background setting rather than New York or Paris for action films was nice. Even if District 9 was made a few years ago, you don’t get to see many action films set almost entirely in Africa very often.

The film’s strength relies heavily on Denzel Washington and Ryan Reynolds — both work well against each other. As Tobin Frost, Washington was smooth at playing the slick anti-hero character who has “been there, done that” in the CIA and serves as a “warning sign” for Weston with his experiences. Reynolds was great at playing Weston, a rookie agent eager to make a name for himself despite his initial work not helping much to enhance his career. It isn’t until he meets Frost that he shows his true talents as an agent and gradually changes his personality and values throughout the film.

Despite the film not being anything new in the action genre, I could have given Safe House a three-star rating because I ended up liking the performances from Washington and Reynolds along with some good action scenes. It helps that the first minutes of the film had a great start with Tobin avoiding the gunmen as he makes his way into the American consulate. Unfortunately, Safe House‘s biggest enemy is the editing. Choppy editing of action sequences, an average-at-best script and the annoying shaking camera effect made it a bit hard to follow, unlike the Bourne films that boasted great editing. Rick Pearsen and Oliver Wood — both worked on the last two Bourne films, by the way — are to blame for the editing and cinematography for Safe House. And if that wasn’t bad enough, the likes of Vera Farmiga, Brendan Gleeson and Sam Shepard were barely used in this film.

In the end, Safe House can be entertaining for an action film. But I think you’re better off watching this on DVD/Blu-Ray rather than seeing it on the big screen.