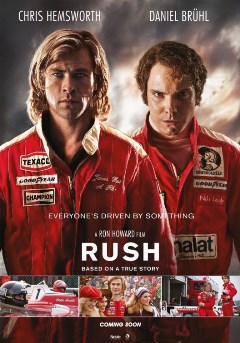 Two years after Senna, Formula One is back in the cinemas again and this time Ron Howard’s Rush boasts an international cast and tackles the rivalry between drivers Niki Lauda (Brühl) and James Hunt (Hemsworth) during the 1976 Formula One season.

Despite Rush‘s opening minutes taking place in 1976 inside a racing track, we are headed back to 1970 not only to see how the rivalry between Hunt and Lauda started when both were Formula Three racers, but we also get to see glimpses of their lives both in and out of the tracks over the years.

The only thing Lauda and Hunt shared in common was their passion for driving and winning because their lifestyles are the opposite: Hunt is more of a casual risk-taker and a party boy who lives his life as if every day was the last while Lauda’s lifestyle is methodical, cold and always serious in regards to his main passion. It’s their clash of personalities, along with a near-accidental incident during the first time they raced against each other, that triggered their rivalry and a drive to upstage and humilliate each other.

Who would you root for? That’s not an easy question to answer at all and I actually enjoyed that on Rush. In spite of their differing personalities, both Hunt and Lauda had their share of good and unlikeable moments and yet both felt like real human beings thanks to stellar performances from Chris Hemsworth and Daniel Brühl. While most audiences have seen Hemsworth tackling a vain arrogant character in Thor — I can’t deny seeing some similarities between the Asgardian and the driver — his performance as Hunt was impressive and even showed vulnerabilities and conflicts throughout the film.

In spite of Hunt looking flashier than Lauda, Daniel Brühl stole the show. He had to tackle the more complex aspects that came with his character’s lifestlye — not to mention Lauda’s traumatic accident that scarred his face — and performed Lauda to a tee in superb fashion. A small proof of how great Brühl was can be simply observed by comparing his Austrian accent with the real-life Lauda’s accent. My only complaint about the Oscar buzz surrounding Brühl’s performance is putting him in the Supporting Actor field when he should be in the Lead Actor field. After all, Lauda is Rush‘s narrator despite the film’s marketing in the USA focusing on the better-known Chris Hemsworth to draw viewers.

The supporting cast didn’t shined much but that was a given due to the film’s subject. Olivia Wilde didn’t got much to do as Hunt’s wife, but she is affected by Hunt’s behavior and career. Alexandra Maria Lara’s Marlene Lauda got more screentime and she gelled well with Daniel Brühl by enhancing and de-colding his character briefly. Natalie Dormer’s brief appearance worked as an appetizer of Hunt’s lifestyle while Pierfrancesco Favino’s Clay Regazzoni got zoomed by Lauda and Stephen Mangan’s Alastair Caldwell had some good lines in spite of his few minutes of screentime as the man who gives Hunt his ticket to F1.

Characters and performances aside, Ron Howard’s direction, Peter Morgan’s layered script and great visual cinematography with dark overtones along with detailed editing and Hans Zimmer’s solid soundtrack for Rush makes the film stylish and thrilling to watch in spite of the already known outcomes from the racing sequences which still showcased greatly the very thin line between life and death. It might have some flaws which revolves mostly around the underuse of its supporting cast, feeling a bit rushed (no pun intended) with its pacing at times and it falls around the clichés that comes with films of this kind on occasion. Nonetheless, it’s an all-around exciting film to watch.