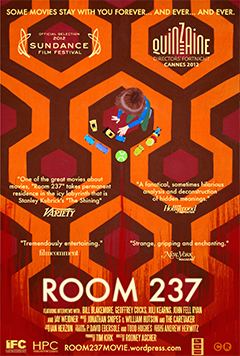 To bring up The Shining around some people is to open a Pandora’s box of speculation that would leave any non-fanatics in a position that they wouldn’t want to be in. Then again, even the bravest of film fans have a hard time mustering up the patience to get through some of those pseudo intellectual rambles.

Room 237, a documentary all about those wacky theories your best friend read about online one night after watching Stanley Kubrick’s masterful horror film The Shining, is a true test of patience like no other. This is the sort of thing you might expect to find on YouTube under related videos for “Pixar and Illuminati Connections” or something equally as crazy.

But it’s not. It’s a documentary that was deemed worthy to show at Cannes and Sundance, but there’s absolutely no finesse in the way it was put together. There’s no real framing to the theories presented and it leaves one with as many questions as one of Kubrick’s films might. Though the most important question it leaves the audience to ask is: why would someone make this?

One segment in the film presents a man discussing a short segment in the Overlook Hotel, and in the background one can hear a child crying and yelling. This man pauses the footage and says, “Can you hear that? My boy… yelling? Hold on one second,” at which point he goes off to quiet his child and close the door.

This is far from what you might find in any normal documentary. Interviews are standard fare and some are less refined than others, but this is an entirely new level of disrespect for the audience and the subject. The subject at hand is arguably not even The Shining itself, nor the farfetched theories, but rather the people whose lives are driven by this inane obsession.

None of these people are ever shown, and all we know about them is their theories. One believes the Apollo landing was faked by Kubrick, one believes The Shining is all about Native Americans being massacred, and another thinks Kubrick’s face is airbrushed into the clouds of the opening scene. Some theories are insane, others are plausible and interesting. It’s how they’re put together and presented that’s the trouble.

Archival footage from all of Kubrick’s oeuvre is brought to the table, moving along frame by frame at times as a narrator guides the audience along their theory. Plenty of footage from other works of art, George Cukor’s My Fair Lady and Hanna-Barbera’s Scooby-Doo, Where are You? to name two of the strangest, plague the film as either vague references or simply just to keep things entertaining.  Everything looks incredibly crisp and clear, but that’s only because it is almost entirely made up of said high quality footage, along with a few reenactments

There are two reasons why Rodney Ascher would present his film in such a way. The positive outlook is that this film was entirely serious and honest in giving these people a voice to express their critical film theory work, regardless of how stupid some might sound.

The other, just as believable, outlook is that Ascher was acting out of contempt for these people, parading their insane theories while also showing just how uninterested in reality they were for the sake of talking about The Shining. It’d be nicer to think otherwise, as exploiting people’s love for something in a documentary is shameful. To borrow a phrase from the Onion’s brilliant series Sex House, that dark suggestion “implies a clarity of purpose that I do not want to attribute to anyone involved.”

It’s unfortunate that Room 237, a documentary with a fascinating teaser and concept, could go this far downhill, but however much of a grating experience it might have been, there will still be people who love this for all its pointless rambling.