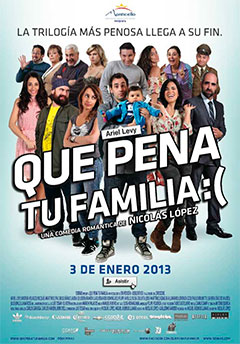 Qué pena tu familia is the final part of de “Qué pena” trilogy that started back in 2010 with Qué pena tu vida and continued with Qué pena tu boda in 2011. It’s the logical conclusion to this comedy chronicle of “love in the age of Facebook”.

Javier (Levy) and Ángela (Velasco) are married now. And their kid is the cutest thing ever. But things are not good. Ángela is becoming a rising TV star, and still manages to take care of her family. Javier is not help at all, in fact, he is very immature about Ángela’s success. Ángela can’t take it anymore and after doing some irresponsible things, decides to break off the marriage. Can Javier recover his family? Can he live like a freshly divorced guy?

I must say this movie was the better of the three. It was very funny, but very poignant at some parts. It may be a rom-com, but it’s not as light as its predecessors and it’s hard to watch at parts. As for the funny parts, I don’t know much about Chilean sense of humor, but this one felt almost like an R-rated American rom-coms. But I also learned a lot of Chilean expletives.

Most of all past characters were there and most had a good reason to be there. And the new characters were quite interesting too. We had Manuel Añón (Tosar), the producer of Ataque al Corazón (Heart Attack), the TV medical drama where Ángela works, and who becomes another reason for Javier and Ángela’s marriage problems. The other notable one was shy Valentina (Zulueta), a woman who Javier dates after his marriage falls apart, who is a total fangirl, and in fact becomes an ascended fangirl when she ends up in the cast of Ataque al Corazón.

The aesthetic of this movie continues from the other two, it still uses facebook and other social networks a lot, especially for visual effects. Even at the beginning, the sponsors were shown as a cellphone app. Ah, the sponsors. Just like in ¡Asu Mare!, another Latin-American production of similar tone, the sponsors are quite important. They are unashamedly shown as in movies like, let’s say, Transformers. In fact, one of them is even relevant to the plot.

In the end, Qué pena tu familia is a decent ending to a story about relationships in these modern era. While it is bittersweet, it finishes with an upbeat tone that could mean more movies, but I really wish they won’t do more.

Also, check out Eli Roth’s minor role as Elias Robles, the actor who plays Dr. Zacarías in Ataque al Corazón. This must be small preparation for Aftershock, López’s next movie based on Chile’s earquake of 2011, where Roth is the protagonist.