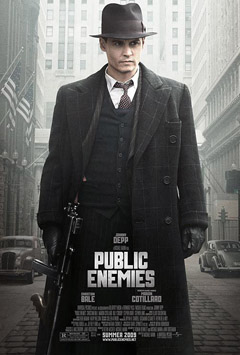 Public Enemies is a movie about the image in front of the man that was John Dillenger. It is fact-based but far from the truth because so much of it is dramatized and fictionalized for our collective entertainment. It zeros in on the mythical qualities of a depression era bank robbing outlaw during the later stages of his storied and sensationalized career. Dillenger (played competently enough by Johnny Depp) becomes something of a legend in his own time, as the downtrodden public praise him for his Robin Hood like characteristics, and the desperate Government forms the F.B.I., headed by J. Edgar Hoover (an ambitious but silly-accented Billy Crudup), and a task force of green agents led by the all business Agent Melvin Purvis (Christian Bale as Batman without the costume) to take him down.

The funny thing is that for all cool gangster action and moody character building moments, of which there are many, they end up being so spread out and evenly filtered through all the major players that there is very little actual insight into any one character. At one point we get some character related dialogue from Dillenger while he is laying down the simple truth with his future girl (the sad girlfriend who knows things will end badly but just can’t help herself, Marion Cotillard). He says something like, “I like fast cars, good food, nice clothes and you“, and also mentions that he is a bank robber, just so you know. Now that’s all cool stuff and it works for her, but is that really all the insight we are going to get into his motivations, because that’s pretty much it.

We are never really, REALLY in Dillenger’s head (though some of the close ups in this movie may have been), so if the whole movie is focusing on one man but never offers up any real answers, nor does it really ask any real questions, what are we left with? A bunch of pretty pictures in a vacant, glazed over, and possibly half-baked film, albeit one with some very cool things happening to draw your attention away from these not so glaring faults that reveal themselves only in the fullness of time.

What’s left is heaps of good actors chewing scenery, and a few stand out supporting roles, all thrown on the back burner so that things can just happen until the credits eventually roll.

If I had written a review about this movie right after watching it, I think it would have been pretty much a glowing celebration of a modern classic, but as it stands now, I can’t really say that. I think that what it did, it did well, but the things it didn’t do, nor even really attempted to do, are the things that ended up sticking with me more then the content of the actual movie.