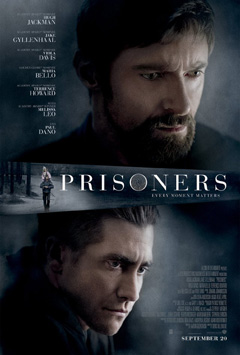 I really REALLY liked Denis Villenueve’s Incendies. It haunted me days after watching the film, so I was interested in seeing what he could come up with in a film in English. In Prisoners, we follow a man name Keller Dover (Jackman), whose daughter Anna (Erin Gerasimovich) is kidnapped alongside her friend Joy (Kyla Drew Simmons), the daughter of the family’s friends Nancy (Davis) and Franklin (Howard).

A creepy young man caught in his RV named Alex Jones (Dano) is suspected of kidnapping the girls, but Detective Loki (Gyllenhaal) is unable to get any tangible evidence to charge him with anything and lets him go. Outraged and unable to do anything, the tables turn as Keller takes justice in his hands.

I’m going to be honest with you, I thought Prisoners lost a lot about halfway through the film or whenever they get to watch the tape and told us a bit of the backstory on Alex — you gotta know who did it by then, right? Anyway, the drama and the acting is generally good, especially from Dano who steals the film from anyone. Sadly, most of his scenes are with Jackman who seems just big and loud in his role as the distraught parent in contrast.

The pacing of the film is similar to Incendies, but since the story isn’t as interesting or twisted — it lacks the cultural, political and religious background the other did — it feels slower and denser than it should, despite using well its atmosphere. By the second half — or maybe three fifths into the film — I had already lost most of my interest on who had taken the girls, so I cared little for the character of Bob Taylor (David Dastmalchian) and was waiting to see when Dt. Loki would find Keller, and have Prisoners over with. It is a pretty long film that I think would have benefited more from character development and slightly less red herrings, even if the Taylor storyline does reveal elements that help with the case.

Overall, though, as a thriller, Prisoners is lacking ‘thrills‘ for sure, but it works decently as a drama, especially if you’re a parent I suppose. It would make the experience of getting into the shoes of the Dovers (that includes Maria Bello, by the way) and the Birchs a lot easier. I still can’t figure out Detective Loki, though. Gyllenhaal did a good job with him, but his character could’ve been played by anyone. I thought he would have had more to do than just save the day.

I’m disappointed, but it’s watchable. If I had been dying to see this like I was with Elysium, this would be the biggest disappointment of the year.