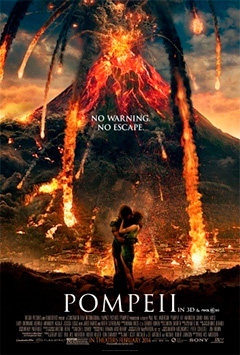 Pompeii is as much as the last days of Pompeii before Mount Vesuvius erupted and killed most of the city’s population, as Titanic is about that huge boat sinking. Sure, Pompeii showed the destruction and all, but it’s also a love story. It starts in Britannia, where tribe of Celtic horsemen are wiped out by Romans. A child, named Milo, is the only survivor.  The boy is found by slave traders, and, fastforward seventeen years later, Milo has turned into Kit Harrington with abs, who is now a gladiator. Milo is sent to Pompeii, where he meets the noblewoman Cassia (Browning) on the road. They briefly bond over an injured horse. Of course, we also need a bad guy, because death by volcano is not enough drama. Here comes Senator Corvus (Sutherland), the one who lead the destruction of Milo’s tribe and personally killed his mother, and now also wants to blackmail Cassia’s father (Harris) into making her his wife. The drama escalates until Mount Vesuvius happens.

Pompeii is not a good movie, but it is very entertaining. Almost to guilty pleasure levels.

Sure, the acting can be painful. School show painful. And the script is either generic or ridiculous. But some of the actors try to make the most with it. Like Akinnuoye-Agbaje, who’s a gladiator at portas of becoming a free man with his last fight. Atticus is a honorable man, one who will bond with Milo, and you’ll instantly like him. Even when his lines are ridiculous, Akinnuoye-Agbaje’s intensity will have you rooting for him. Another entertaining piece of acting is Sutherland’s. I don’t know what’s up with his weird accent, but his scenery-chewing was on point. As for Harris and Moss, they had the part of nice but ultimately useless parents to poor Cassia, and they did the job appropriately. And Lucas was lovely as Cassia’s BFF and servant, loyal to the end. The other named characters, Graecus, the slave owner, and Proculus, Corvus’ first officer, were created for you to hate and cheer when they meet their end. It’s a thankless job but someone has to do it, and they did it with aplomb.

And the main characters? Between their one facial expression, Harrington and Browning were made for each other. Milo and Crassia love horses and hate Rome, and they are both very pretty. What more do they need in common? Besides, they had like 20 minutes together at most through the whole movie so I guess that brief bond that made them feel alive was enough and they made the most of it. It was cute and sad.

Acting and script issues aside, Pompeii was very pretty to look at, and better than that it was mostly historically accurate! They even had Cassia and her servant girl jump over pedestrian stones and they showed a masked chorus at the arena, I could cry! And there was Londinium at the (almost) beginning! OMG, Roman-times London! It’s the oldest London I have ever seen in a movie. I confess I may have fangirled and it is probably a reason why I am giving this movie so much slack. So yes, Paul W. S. Anderson and team, I appreciate the effort, even if I still think Cassia’s villa is way too close to the volcano and too far from the main city for certain things to happen.

Also, I saw the movie in 3D so I got to experience having ashes, lava, stones and debris fly into my face. It made the depiction of Mount Vesuvius’ anger even more “entertaining”. It’s almost a shame that eruptions happen so fast, since they did everything quite imaginatively, despite a couple of unintentionally hilarious moments.

As an anecdote, I must mention that there was a minor earthquake on my city while an earthquake was happening in the movie. Took me a moment to remember I wasn’t watching a 4Dx movie. But it was very brief so I didn’t mind~