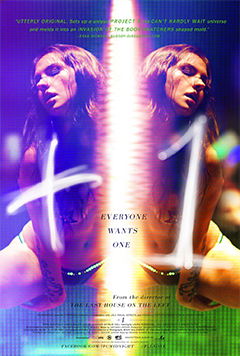 +1 kicks off with a couple of friends heading to an immense college party, with one of them looking to confront and reconnect with his ex-girlfriend over the course of the night. Most of the film’s first act plays out like a straight party movie, with all the trashy white kids getting wasted you’d expect and some crass humor that doesn’t always work out. Some bad special effects hint at something more ominous, and once Gullo & Iliadis’ real intentions kick in, things get plenty more interesting.

Moving the work from a traditional party film to an imaginative sci-fi thriller is a smart move. Mysterious blackouts kick in, causing a shift in time that creates doppelgangers of everyone at the party. Romantic drama devolves into this incredibly uncomfortable obsessive relationship, with the doppelgangers factoring in to heighten the creepiness levels of it all.

Wakefield plays the role of hung-up ex just right, only serving to make Hinshaw’s yelling about why his attempts at winning her back are just plain stupid so much better. “You made me feel replaceable,” she tells him, and considering he kissed another woman smack out of nowhere, she’s entirely in the right. The fact that he sets out to fix things with her doppelganger instead of getting over her only serves to enhance the statement.

And that is really one of the best features that the filmmakers bring to +1. They never strive for this to be a love story and that’s what makes the thriller/sci-fi backdrop so perfect for a tale of obsession, honing in on the reality that many men choose to fall in love with an idea rather than an actual woman, making for an unstable human being. This isn’t to say that it doesn’t get heavy handed at times and doesn’t stumble over plenty of missteps with its other characters, but to expect much better from a party movie would be a mistake.

Of things to not expect from party movies, Mihai Malaimare Jr’s photography is at the tip-top of the list. It’s a long way away from his work with Paul Thomas Anderson or Coppola, but there’s still some innovation to the way he and Iliadis work together. It’s further proof that +1 is a smart concept with interesting execution. Even with its flawed writing, it’s an original little piece of work that echoes the eeriness of The Twilight Zone but doesn’t land as well as it could have.