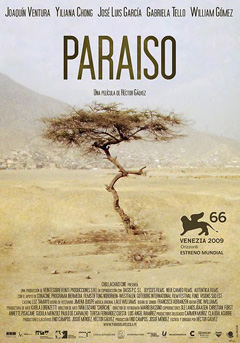 2010 was a damn fine year for Peruvian cinema. Maybe not commercially, and though local cinema still struggles to compete with the Hollywood juggernaut, visually I can’t complain about it. We are becoming technically better. I can certainly be happy about that. It wasn’t only the release of Paraiso (crowned as the Best Peruvian production that year by APRECI), but 2010 also saw Octubre and my personal favorite, Contracorriente, hitting theaters.

In Paraiso, Hector Galvez does what eventually Michel Gondry ended up doing on The We and the I, working in community workshops, Galvez got together a group of Peruvian kids of the closer outskirts of Lima and told a fictionalized drama that reads a lot like a documentary at times. Following a group of friends who live their lives trying to make it through one more day to find a way out of the place they are, at the same time as they try to honor the life of a friend who had recently passed away.

The central problem in Paraiso is that it barely has a plot. On the DVD, Galvez confesses that for a while, he only had the beginning and the end of his story, and you can tell since the middle has little to no connection to these separate parts. It makes for a great way to contemplate the lives of these people, maybe even looks a little exotic for outsiders, but stays true to the local flavor. All this familiarity may be a little boring to some, but Paraiso does hold some lighter elements like the chicken dancing at the Pollo a la Brasa restaurant- it does not get more Peruvian than that.

Though the plot, or lack thereof, seems a little jumble together, there are still human elements that make you connect with these kids, be it “la Sara” (Tello) and her failed relationship with Mario (Garcia) and how her mother gives him evil stares, Lalo’s (Gomez) problems to actually get good grades in school, Joaquin’s (Ventura) trying to figure out what he wants to do with his life, and Antuanet’s (Chong) eager demeanor to be academically great to make something out of her life. They’re all very real and quite honest, painted with broad brushstrokes of some social and historical commentary to paint quite a decent overview of what it’s like for a huge sector of the population.

It is, however, that lack of straightforward plotting that holds back the film from mainstream appeal — especially for that very coveted local audience. It is what holds me from telling all sorts of people to watch it, instead only getting recommendations for those interested in art house films. However, in the larger scale of things, it’s great to see the Peruvian cinema expansion, even if it’s not yet able to compete commercially with other more developed entertainment industries.