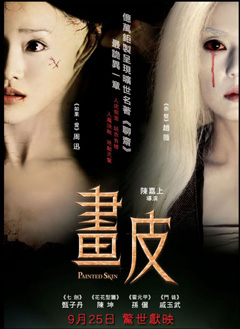 Since China just recently released Painted Skin: The Resurrection [1] — a.k.a. Painted Skin 2 — I took some time off my weekend to watch the most recent re-telling of the popular classic Chinese ghost story, which was nominated in a gazillion categories at the Hong Kong Film Awards, baffling people all around.

See, people. This is what’s wrong with filling nomination quotas. Even if there are not enough movies for five great nominees, you have to nominate pseudo-epic romance masterpieces like Painted Skin.

We’ve all heard the story — or maybe you’re new to Asian folklore? Spirit foxes — you can maybe compare them to mischievous forest nymphs in the West — they sometimes like to live among humans just for fun… this is the story of one of them.

Xiaowei (Zhou) a spirit fox, who must eat human hearts to retain her human form — no biggie — has just taken her latest victim, but is smart enough to play damsel in distress when noble general Wang Sheng (Chen) “saves” her and takes her back home to live with them alongside his wife Peirong (Zhao).

All of a sudden, people start getting killed for their hearts. Meanwhile, Wang Sheng and Peirong’s marriage is in peril when Wang Sheng begins falling for the magic of a conniving, but seemingly in love, Xiaowei, and Wang Sheng’s old general and ex-opponent in love Pang Yong (Yen) comes back.

Though masquerading as an action fantasy film with ghosts, demons and fights — thanks to Gordon Chan’s background in the genre — Painted Skin is a romance — a love hexagon, really. I’ll give you this, the film is really beautiful to look at. Art direction and cinematography… Painted Skin is quite the looker. Technically, things could be better. The pace of the film is fast, but it doesn’t feel like it. It’s brash and abrupt at others, when they didn’t know how to finish a scene, resulting in those uninspiring “fade to black” cuts.

Actresses Zhou Xun and Zhao Wei do decently well with the material they were given, but the script never manages to scratch more than just the surface, resulting in a rather cold and anticlimactic ending, despite the big fighting sequence… which they are not part of. Chen Kun’s character is as annoying as can be, as a one-dimensional prick who’s so self-righteous that he can’t trust his wife, the love of his life, when she suspects Xiaowei is not human. While Donnie Yen’s character never truly leaves the page as a real person.

Some of the fighting sequences are good, though. Also, Betty Sun, who plays Xia Bin the demon buster, is quite entertaining with the little background she got. How this script was nominated for Best Screenplay ANYWHERE is a maddening mystery.

If we’re talking Chinese fantasy classics re-told about demons who fall in love, maybe you’d be much more affected by The Sorcerer and the White Snake, which despite its lacking technical qualities, has a much more emotional connection.