Paco and the Magical Book 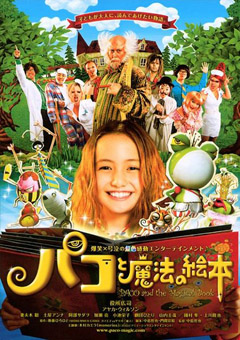 Tetsuya Nakashima’s Paco and the Magical Book tells the story of grumpy old Onuki (Yakusho) as he collapses at a board meeting and is sent to a hospital, in which he meets a whole bunch of picturesque characters, including a little girl named Paco who can only retain memories for a day.

Ever since I discovered Tetsuya Nakashima, I’ve often referred to his style as Tim-Burton-esque, not because it resembles Burton’s style, but because Nakashima’s work uses rich visual enhancements in his storytelling – thanks to his background in CMs. Do any of you guys know the Rolling Bomber Special? He combines amazing color treatment, art direction, cinematography and mashes it all up with anything he can… be it a bit of violence, grandeur musical numbers, or animation.

Paco and the Magical Book is a dramatic comedy that’s Disney on LSD. It is one horrorific tale.

In the end, it isn’t much of a surprise when you begin watching the film and find yourself in a very Disney-esque world, with a Lion-King-esque chant and all – after all, this is supposed to be aimed at a younger audience. However, don’t ever fool yourself into thinking that this will dumb down anything that Tetsuya wants to show… which includes a punk-goth, tatooed, blond nurse (Tsuchiya), a psychologically insane ex-child-star bum (Tsumabuki), a raging drag queen, whom a lot of people are referring to as “gay” (Kunimura), and a blood-sucking, neck-biting, vampire-esque nurse (Koike). And don’t forget the grumpy old man who doesn’t back down when hitting even a kid.

Yes, the film is nuts, but it’s worth watching. Though these characters seem to be straight out of something adults would enjoy more than children, and the visual style might be a turn-off to people at the beginning, the story might surprise you by the end.  Though Koji Yakusho plays a very unlikable grumpy old man, Onuki turns out quite a redeemable character despite all his defects. This bunch of outsiders that seem to belong nowhere else but that hospital, with all their eccentricities, they’re all sweet people too!