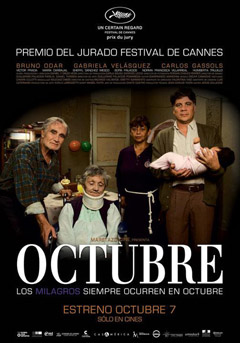 Shot in the heart of Lima, October is a simple portrait of people leaving and surviving in Peru. We have a peculiar man loaning money to the people in need of it. A lonely woman devoted to her religion, yet longing to be loved by a real man. An old man so in love that he would do anything for it. In all of this, a child is thrown and things start to change.

Octubre was very solemn, melancholic and just plain; extremely plain. As a Peruvian-born and somewhat Peru-raised person, I didn’t really identify what I was seeing, that was not the Peru I remember. Sure, it has been over 10 years since I was there, but I thought that things had become better. Yet, in the poverty shown in the movie, I sometimes could remember and have “aha” moments.

The film won two critically acclaimed awards at the Cannes festival, so I was very much looking forward to experiencing why. While watching the movie, as well as instantly after it, I couldn’t get it. I was left with a sense of something missing. There was really no real plot in there, just the aspect of a bigger story. After a couple of days, I found myself thinking about the movie and being amazed about its simplicity, which is what makes it good. It doesn’t try to be flashy or too heavy as to make a movie that gets stuck in your mind. Octubre just is, with no intentions of being great nor inspiring, it just is as it is. A movie about people struggling in today’s Lima, doing their best to survive.