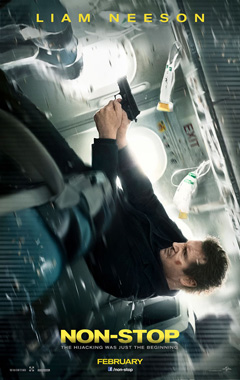 I don’t know why I have a reputation of being a testosterone-hating girl in regards of movies. I do enjoy fine action flicks (just go check Ip Man, if you haven’t already), I just don’t think America’s been doing a good job with their action stars. They make cool movies with actions sequences, but I haven’t seen a star in so long. Though Liam Neeson has managed to jump-start his career as a broody action hero, many of us are still baffled by this turn of events. He might be able to pull off his dramatic scenes without looking like a fool — I’m side-eyeing you so much, Tom — thump his adversaries with a hand smack in a camera close-up… but a full-blown action star? I can’t.

In his latest adventure taking place in an airplane, Neeson continues the Taken–The Grey–Unknown formula of broody angsty hero; an air marshal with a bad reputation must stop a terrorist in a transatlantic flight who is threatening to kill passengers unless he gets $150M USD transferred into his offshore account. Is it a passenger, a crew member, one of the pilots? Where is the freaking plane?

It’s not so much a whodunit scenario if you are familiar with actors, as much as why they’re doing it. After her Academy Award win, who is expecting Lupita to be the bad guy here? Or is Moore a red-herring? Non-Stop manages to avoid the most obvious (racial) suspect, because… remember how baffling it was to watch From Paris With Love? It is now somewhat socially unacceptable (and boring) to make the Middle-Eastern-looking passenger the bad guy. The positive aspects of the film? For a good chunk of its running-time, Non-Stop feels claustrophobic… tense, which is different to your reaction to the loosely similar Flightplan. Having the characters confined into this enclosed space thousands of miles up in the air, it’s a great experience to have just like when you felt like choking while watching Buried. Nobody is going to deny that Neeson is a compelling actor, maybe his somewhat tragic life makes you root for him even further.

All these action films, however, from Unknown to The Bourne Legacy, they’re all starting to mesh together. Looks, color palettes, film style, maybe even mood. Through it all, Taken will always be the most engaging of all. I doubt I’d be able to recognize this one when catching a glimpse on television, but Non-Stop can be entertaining for a while- I still don’t understand the point of casting Julianne Moore, but at the same time I would probably also be complaining about the casting of a younger unknown. There just wasn’t much for her to do, even though by the end the passenger craziness gets very convoluted, and the resolution is as ridiculous as possible.

Just having to actually think about the movie makes me like it less. Ha!