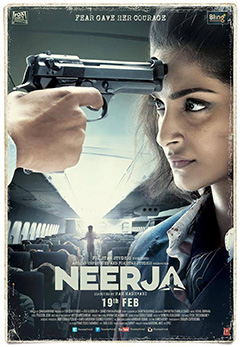 Yup, definitely have soften up with Sonam. xD

When I saw the trailer and read about Neerja, I knew that I was going to -at least- like it for that. The only hurdle I foresaw was that Sonam Kapoor was lead, and was probably going to have to carry the whole movie on her shoulders. Once the film was over, I thought to myself “Well… Neerja is the best Sonam has ever been~”

As some friends have pointed out, that’s not saying much. However, if Sonam never ever delivers a good role ever again, she’ll have Neerja to be remembered for; and Neerja Bhanot will be remembered for her heroism and temple.

That’s as good as it can get, right?

[the film] tells the story of a 22-year-old Pan Am flight attendant who lost her life on September 5th 1986 when her flight, doing a stop in Karachi, was hijacked by four heavily-armed terrorists. The three American crew members left the aircraft, and she took charge of the situation saving the lives of the passengers, several of whom were American and were the target.

And though that’s literally 85% of the film, Ram Madhvani’s focused direction makes it a smooth sailing –compared to Airlift and Wazir, for example– following just enough of Bhanot’s life previous to the hijack to give us a sense of her self and her family, and diving completely in that tense atmosphere of the claustrophobic plane. Half of Kapoor’s performance, of course, comes out from her hijacker nemesis Khalil, played to extremes by Jim Sarbh. He shouts, pushes everyone around and intimidates everyone, including the viewer.

That sense of inevitability is present at all times and never falters until the very last moments when, I thought, it did drop the ball. I haven’t read how exactly Bhanot lost her life, but I felt a bit exasperated –or perhaps it was helplessness– how it all seemed to happen with the kids. I also didn’t feel Shabana Azmi’s last monologue during the one-year memorial with the burial and honoring montage, despite feeling her character’s impotence to do anything but wait. I could probably be bawling like a big baby, but didn’t.

But, yeah, more people should know this story.