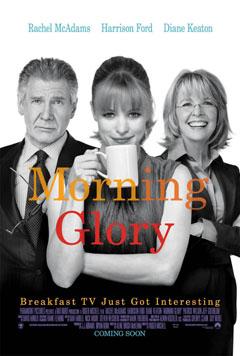 Morning Glory follows eager morning show producer Becky (McAdams), who was recently let go from the network she’s been working at for the last couple of years. Becky finally gets the chance to work for Daybreak, one of the messiest and least watched shows, headed by Colleen Peck (Keaton).

As Daybreak limps its way down to the bottom of the ratings list, Becky sets out to save the show… and her career.

Let me start this off by saying that Morning Glory is a total Chick Flick, and an incredibly fresh one at that. Don’t worry, guys. You can like this film too. After starting out her career as a mean girl, Rachel McAdams plays what Hollywood thought was impossible — a career woman who’s not a bitch to others.

Becky loves her job, is efficient, considerate, and tries her best to pull this show together, even if time seems to be running out for her dream of becoming a producer for the Today Show. In the process, she meets Adam (Wilson), a “real” news producer and strikes a relationship with him. However, this is never the focus of the story. Instead we see her getting involved with the people that work with her… which includes Becky’s journalist hero Mike Pomeroy (Ford).

We could look at Morning Glory as a romantic comedy in which Becky’s job is the love interest, because even if the sight of Patrick Wilson’s presence is… appreciated, the few scenes he’s in could have been edited out in favor of more work related time.

The acting was solid, McAdams proves to be a strong lead opposite Ford and Keaton, though the latter is underused. Ford plays quite a likable unlikable character. He’s a snob, overly-serious, and puts people down… a normal sad old man, you could say. Add to that a never-satisfied boss in Jeff Goldblum, and a variety of odd reporters and anchors that include Modern Family‘s Ty Burrell.

It’s good to see a movie like this, and better yet with a charismatic McAdams.