Monkey King: Hero Is Back 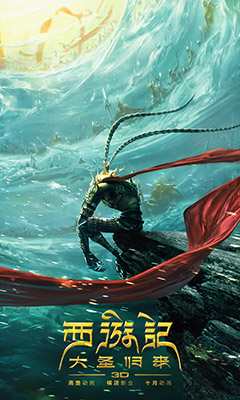 I’m surprised and super excited to see that only months after the release of Boonie Bears: To the Rescue, Chinese animation has come up with something like Monkey King: Hero Is Back. Sure, it may definitely have a higher budget, but the return of the Monkey King is on par with any Dreamworks product at barely 10% the cost.

We begin with an impressive crash-course on the legend of Sun Wukong (Zhang), who rebelled against the Heavens defeating hundreds of thousands of celestial warriors. When he was finally captured, he was imprisoned in Buddha’s Palm turned into a mountain, until 500 years passed… or so the legend goes. Years after the passing of his parents, little Juang Liu’er (Lin) encounters himself with the same monsters that tried to take him away as they attack a tiny village and try to kidnap the babies. Saving a little baby girl, whom Liu’er fondly refers to as Sha Ya Tou (傻丫头, foolish girl), he sets off to safety only to free the Monkey King and have the monsters hot on his trails for the baby.

Zhu Baije (Liu), or Pigsy, the humanoid pig who was banished for his earthly misconducts (with food… and women), also makes an appearance.

While the introduction is the most impressive (and flashiest) animated sequences I’ve seen lately, Monkey King: Hero Is Back does settle itself comfortably into a more American mainstream CG aesthetic which has dominated the market since 3D animated films became the norm, and has little to do with some of the cool promotional material found online [like the poster]. Technically speaking, it’s an impressive feature to achieve with a budget of $16M USD, though you can still perceive stiffness -in animation and, perhaps, modeling- in Liu’er, especially during the quieter moments, it’s all made up when showcasing the Monkey hero.

Not to say the film doesn’t have its own flare, due to its Chinese Opera background, a few of the action sequences are scored to that -already familiar to me- musical style with those energetic cymbals and the jinghu (京胡). It, of course, shines the best during these; be it in an escaping sequence or an attack, both of which there are many. And very much like Dreamworks films are riddled with childish fart/poop jokes that can get on your nerves, Monkey King is unabled to escape them– See! The child has a really runny nose, and the monsters like to eat boogies! However, it uses it more sparingly to tolerable measure. By its third act, they’ve already featured the coolest and most terrifying CG White Dragon, as well as an underground giant worm-like monster with legs, and hit you with the biggest emotional punch-

Remember how many parents bemoaned when How to Train your Dragon 2 dared to kill someone? I’m reserving my judgement on this because the credits montage shows a different outcome, but I never expected a children film to pull that off. Then again, I had to remember that Sun Wukong IS the star of the film and no one else.

Overall, I thoroughly enjoyed this, even though I was already approaching Chinese animation with a certain degree of skepticism. Now that Monkey King: Hero Is Back is currently the most successful one with over $150M USD at the box office, I’m eagerly waiting for what Little Door Gods [Trailer] has in store for us.

The only thing left for China to get into the global market is to get their international dubbing game going, because they certainly don’t expect little kids to read subtitles… especially when dialog tends to be so fast, right?

Monkey King: Hero Is Back gets US Distribution through a partnership between AT&T’s DirecTV and Viva Pictures, dubbed in English featuring the voices of Jackie Chan and James Hong [1]. It is available on DirecTV Cinema.