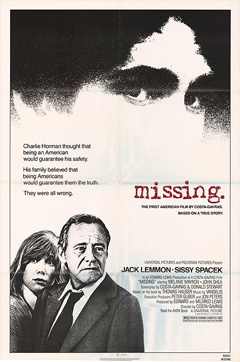 Missing opens by introducing us to American journalist Charles Horman (Shea), his wife Beth (Spacek), and his partner Melanie (Mayron), all of whom are stuck in Chile during a military coup in the 1970s. With the airports closed, the group struggles to find their way out, and one night Charles goes missing. What ensues is Beth’s desperate search for her husband, with help from Charles’ reluctant father Ed (Lemmon) who flies in to help find his son.

Writer-director Costa-Gavras and co-writer Donald Stewart present a harrowing look into the events that took place in South American countries during this era. Grounding the film in American characters is an easy way to make the film more accessible to American audiences, but the film does use them properly to showcase the complete paranoia that comes with a situation like this. Torture is often alluded to and gunshots populate the background noise, a surefire sign that turmoil is afoot.

The audience gets glimpses of the events that took place in the past, before or after the kidnapping, showing the slow progression of the military coup. These flashbacks offer a good look at John Shea’s performance and additional layers to understanding just why Charles was taken. The story unfolds in the form of a political thriller, tensions always high as the duo searches for their missing son/husband. Political opposition comes from every corner, especially the American government that claims to be preserving the American way of life, and at times it seems like there’s no hope left in store. This sense of hopelessness provides a compelling contrast to their emotional journey, especially as Beth tries to get Ed to understand just how important and loved Charles was to her and those around him.

It’s interesting to watch Lemmon in a role such as this after knowing his comedy background so well. Spacek’s is less surprising, as her dramatic work is well-known, but the two dive into their ever-evolving characters beautifully. One first witnesses Beth as a timid woman and Ed as a harsh father set in his ways and unable to adjust to the ways that his son lived and the country worked. Poverty, civil unrest, and political opposition are things that a Christian Scientist like Ed Horman are not made for and it shows, while Beth adjusts to the demanding nature of their hunt in a better manner.

Two of the film’s most impressive and heart-wrenching scenes come in the latter half. The first features Beth and Ed in the stadium where the prisoners are kept, barely able to speak out. Their voices may be loud due to the microphone, but they are minuscule in comparison to the sheer size of the stadium, filled to the brim with prisoners. The other takes the two down into a basement to look at the dozens of dead bodies that have not been identified, where Beth breaks down at the sight of a dead friend. Immediately after, Beth and Ed sit together in an office, he holds her hand, and asks, “What kind of world is this?”

Missing presents a look at what insurmountable pressure and desperation can do to a human being. While the focus of the film stays on an American family, there is no doubt that Costa-Gavras cares to give the world a solid look at Chile during an era where one wrong step could leave you dead in a ditch.