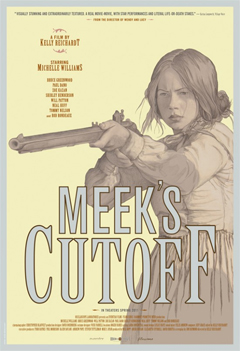 While most Western films tend to focus on their male characters, Kelly Reichardt took to a focus on the women of the time. With a slow pace and a focus on landscape and expressions, Meek’s Cutoff is a fine look at just how far minimalist filmmaking has progressed.

Meek’s Cutoff – which is loosely based on historical events – takes place in 1845 and begins by introducing us to a small group of characters going through the motions of life in the harsh Oregon desert. Although many Western films tend to have strong male protagonists, this one takes a focus on the women of the period, which makes for a refreshing and interesting film.

The film features three families who are slowly realizing how hopelessly lost they are. They have been led astray by their guide Stephen Meek (Greenwood) – who seems to be pushing them forward blindly, even though he frequently speaks of his past adventures and undertakings. The families consist of Emily Tetherow (Williams) and her husband Solomon (Patton), Millie and Thomas Gately (Kazan and Dano), and the White family (Henderson, Huff, and Nelson). There are multiple meetings between the men about the distrust of Meek throughout the families and the women stay behind, attempting to listen in while performing their usual tasks.

Soon enough Emily encounters an Indian and within a few days, her husband and Meek have captured the man. While Meek tries to spread fear of the Indian man, preaching stories of murder and betrayal, it is Emily who cuts off any authority Meek might have had and sees the mysterious Indian for what he really is: a tame and simple man who may be able to lead them to water. Although they are unable to communicate with him, only the longing for safety and water fuel the families now – pushing past the unease that Meek continuously attempts to impose on them.

The focus on the women of the time is best shown through Michelle Williams and her performance as Emily Tetherow. Even though the other women seem to fit the stereotype of a Western women, Williams shows us a woman hardened by her surroundings and situation. She can sit back and knit through the day, but when push comes to shove, she can hold a man at gunpoint with no remorse. Bruce Greenwood also does an excellent job as Stephen Meek. As his character leads the rest of the party astray, he reminds us that a foolish man may boast of his accomplishments as much as he pleases, but at the end of the day he remains a fool in the eyes of those surrounding him.

Although many may not find the film’s speed appealing, Reichardt’s slow-paced filmmaking works marvelously Jon Raymond’s minimal dialogue screenplay – truly dropping us into the time and place of these events. There isn’t much of a need for words in this film, letting the camera angles and the actors do all the story-telling. With Meek’s Cutoff, Kelly Reichardt really provides a realistic look into the experiences of these pioneers who traversed miles upon miles in hopes of a better life.