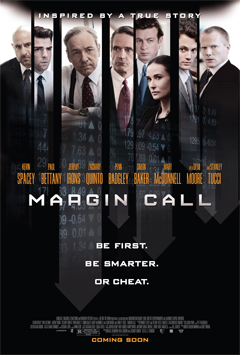 Films about Wall Street and financial crisis always tend to find their way into the spotlight every so often — especially following times of economic distress. While some might make it a point to compare J.C. Chandor’s feature film debut to certain classics like Glengarry Glen Ross and Wall Street, the star filled Margin Call falls short of the legacy these have created.

Regardless of what could be one of the best male cast collections in quite some time, Margin Call suffers from a relatively weak script. The film is a drama — with high hopes of being a thriller — that revolves around an investment bank and focuses on a small group of people working within the company in times of a harsh financial situation. Taking place over approximately twenty-four hours, the pacing of the film gets sketchy at many points. So sketchy, actually, that the climax of the film, unfortunately, comes too early and leaves you longing for any sort of action within the final act.

J.C. Chandor seems to know what he’s doing with a camera. There are some great shots during the movie and plenty of the framing works very well. Unfortunately, his direction and his writing are two very separate entities. The inclusion of about a thousand F-bombs already takes away from just how appealing this movie might have been. It’s understandable that they are trying to portray people under pressure, but I can only hear Kevin Spacey say “fuck” about five times within a few minutes before I start thinking that this was written by a fourteen year old boy.

While we’re supposed to have this overbearing feeling of disaster washing over us, all that you really end up feeling is a sense of boredom. Everything that you would expect to happen ends up happening and the tension doesn’t kick in much, with the exception of a few scenes — like when they’re attempting to sell as much stock as physically possible within a few hours. Even then, we know what the conclusion will be because it’s been told to us, and the characters in the film, in advance. If the events had been written in a different order, the script might have been far more effective. I don’t dare bring up the ending, but I was sorely disappointed at just how unsatisfying the closing scene was.

As mentioned before, the performances were top tier. The two most notable of the group are definitely Kevin Spacey and Jeremy Irons. It shouldn’t come as any surprise to anyone that these two men provided the best performances as they are both powerful actors who know how to play a range of characters. Spacey shows us a man under pressure and Irons a manipulative man who takes advantage of his situation and the people around him. They both might sound like relatively familiar roles for them, but they do a damn fine job at portraying the mediocre characters that were written for them.

It’s unfortunate that such a talented cast was brought together for a movie like this and wasted on poor screenwriting. Margin Call‘s mediocrity may be excused due to it being a debut feature, but it doesn’t leave me wanting to see much more from J.C. Chandor unless he chooses to direct a film that he did not write.