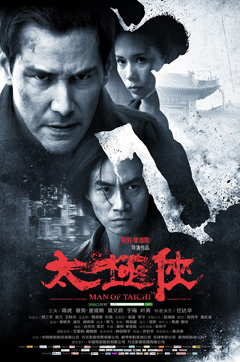 Keanu Reeves’ directorial debut has just been released in China because he knows what’s good. A lot of times, bad actors can direct good movies (Hello there, Mr. Affleck), so we’re giving Keanu the benefit of doubt because he loves martial arts, and he’s serious.

Man of Tai Chi is a really straightforward film; it follows Tiger Hu Chen as Tiger himself, a Taichi practitioner whose unruly behavior is not to the liking of Tiger’s teacher, Master Yang (Yu Hai), who asks the man to control himself and his chi.

To prove that Taichi can be more than just a stretching exercise, Tiger enters a martial arts tournament that gets him noticed by Donaka (Reeves), a loaded guy who runs an underground fighting network where rich people pay to watch — first rule about Fight Club: You don’t talk about Fight Club. You pay and watch it as a show. Jokes aside, this shady testosterone-ridden network has been unsuccessfully hunted by police officer Jing Shi (Mok) who’s always trailing just behind.

When Master Yang’s temple is selected to be torn down because it’s so old, Tiger accepts Donaka’s fighting offer for cash to repair the place, but as he fights, he begins losing his humanity.

Man of Tai Chi has good intentions. Fighting-wise, it’s great. It’s got a lot of real, hard-punching and ow-inducing blows because Tiger Hu Chen is the real deal. Keanu Reeves is also kind enough to never be the center of attention, instead letting you focus on Tiger throughout most of the story — he’s competent in his direction and the way he decided to produce the fighting scene. I had wished there were less cuts and edits to let the fighting flow, but it’s got enough longer takes that let you appreciate the choreography. Chen also has a certain pull, even though the script didn’t allow him much room to work with than being angry.

In fact, the script is the weakest part of the whole thing. How they were able to work with such a thin storyline is a miracle, and this is even with the police segments with a cameo by Simon Yam. Though it was interlinked with the underground fighting storyline, it never felt like there was much at stake. It’s basically Mortal Kombat [1] in the real world and no Fatality or Animality tricks.

I gotta admit, though, it’s nice to see a movie about fighting that asks its protagonist to not fight. But who would’ve loved to see the final blow be Tiger Hu Chen vs. Iko Uwais instead of the fight with Keanu? Donaka should have been a cat-owner bad guy who could send Iko Uwais to fight his final battle. But I guess, that wasn’t what Man of Tai Chi is about. You owe me a life.

The fighting makes up for most of the blandness of the script.