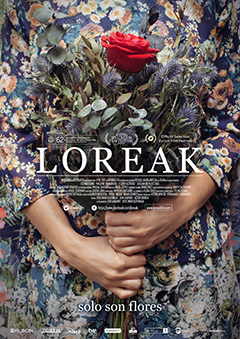 Though the film didn’t make the Academy Awards‘ Foreign shortlist, Loreak (which means “flowers” in basque), is making its way to US theaters in limited locations this week. Despite the fact that my mother tongue is Spanish, my Spanish cinema game is a little weak, let alone my knowledge of Basque Cinema— I can only speak of For 80 Days [Trailer], which I got to watch just a couple of years ago, and also happened to star Itziar Aizpuru.

In Loreak, we follow the life of Ane (Aranburu), a woman -diagnosed with early menopause- working at a construction site who, day after day, begins to receive an anonymous bouquet of flowers. At first, she believes it to be a mistake, but soon discovers that these are clearly for her, to the dismay of her disgruntled husband. Ane begins feeling happier and more sociable than she’s ever been, until the day the flowers suddenly stop arriving.

Realizing the identity of the sender, the reason why they stopped and why it all might have started, Ane must deal with her own desolation as she befriends Tere (Aizpuru), who tries to sooth her own despair. Misery loves company, they say, and no one seems less content than Ane, who follows an unhappy routine with a husband that just doesn’t take her into much account, and when they try to connect, they end up clashing. The composition and color treatment also complement the idea of loneliness and isolation, which directors Garaño and Goenaga present, with the muted color palette and clear framing, except when flowers add some spark to our protagonist’s lifeless existence.

Nagore Aranburu’s performance is nuanced, as she struggles with her own desirability, which in turn drives her towards the eager acceptance of the unknown male-attention. She basks herself in this, starts paying more attention to her look, and for a while we see a faint smile crept over her lips– someone must be watching her! There’s a certain Audrey-Tautou-esque element to her delight during the first quarter of the story, but her role becomes a lot more complex when she finally is confronted by Itziar Ituño’s Lourdes, who plays Tere’s stranded daughter-in-law, without spoiling the film. The both of them seem like complete opposites when it comes to dealing with their loss, which creates a bizarre contrast and an odd encounter.

There’s a bit of a hiccup when the story focuses on the desire of the deceased to be used in medical science, which I suppose could play with the idea of people wanting to have something to mourn, instead of just an empty place in the ground and a random place where to place their tokens of appreciation. Overall, Loreak deals with loneliness and mourning; how people would hold on to those who have already parted, by remembering them to compensate the hole that they’ve left in our lives; and how little by little, some begin to move on. And sometimes life gets the best of you.