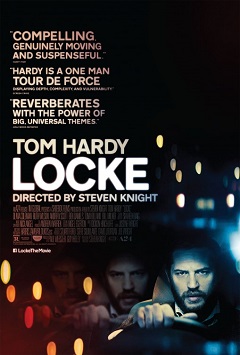 Whatever the situation is, you can make it through.

When I think about Tom Hardy, I think about his body. No, really. His physique has always been important when it came to his roles, if you haven’t seen him in Warrior, do yourself a favor. After I read that he was going to be inside a car for over 80 minutes without doing much else, I was interested in seeing him like this… and to be honest, a bit skeptical as I didn’t believe he had what it takes to keep an audience’s attention under those circumstances.

Locke is about a car. Just kidding! It’s about a guy named Ivan Locke ( Hardy), a man inside a car driving for an hour and a half. During the film’s length, we get to see him dealing with different aspects of his life while on the road to London to take care of the one mistake that messed his life up.

Doesn’t sound too appealing, right? Even though the story drags here and there, the movie is good. This is not like one of those films with people locked up in places, making phone calls because other people are kidnapped or in danger — Buried comes to mind. Here, there are no terrorists or psychos. Ivan is locked (haha, get it?) inside a car, driving, because he chooses to be, ok? Just to make that clear. This is not another Phone Booth. Moving on…

Tom Hardy delivers one of his finest performances to date. He is intense, engaging and emotional as he takes us through a self-destructive journey in which his character gets too many phone calls: from his boss, his wife, his one-night-stand mistress, his co-worker. You see, Locke is a beloved husband, father and responsible construction manager who has always kept his cool and has always been in control of his life… until the moment he realizes he’s about to lose everything due to the biggest mistake he’s ever made. Hardy’s portrayal of the calm and serious Locke is really fascinating to watch since he’s able to bring so much emotion into every simple gesture, using his subtleties to dazzle us, making his story particularly hard to watch.

Director Steven Knight’s almost-one-man show manages to compel us throughout his character’s implosion. We get to see how this man’s life crumbles and falls down into pieces without being able to do anything, struggling against his past’s demons, his own conscious and every instinct of his survival. He just wants to do “what’s right.” He wants to right a wrong, while cleaning his family name. Is there anything left to save, after you lose everything that you care about in life, everything that you’ve ever worked for? Bold and minimalist, along with an incredible supporting (voice) cast, Locke builds a great scenario from which to witness a man’s fall.

And boy, what a fall is this.