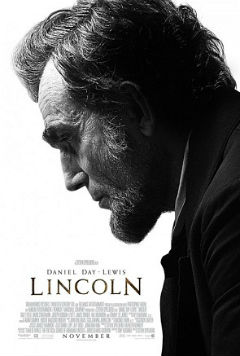 Like 2005’s Truman Capote biopic Capote, Spielberg’s Lincoln is not an all-encompassing biopic of a man’s entire life, but rather a solid character study set during a pivotal period of his life. We see Abraham Lincoln during the waning months of the American Civil War, a time in which the 13th Amendment — which banned slavery within the States — was being debated in congress. For those who know their history, this is also the last few months of the 16th President of the United States of America’s life. Now that, my friends, is one hell of a ticking clock.

Daniel Day-Lewis, as he often does, disappears completely into the role; changing his gait, the pitch of his voice, and, thanks to grade-A make-up and prosthetics, his physical appearance. The Lincoln we are presented with in this film is not only the Commander and Chief of a nation at war with itself, but also husband to a wife still mourning the loss of a son three years prior (Sally Field), and father to two sons — one who wants nothing more than to serve his country (Joseph Gordon-Levitt) and the other who is morbidly fascinated with the war, but too young to do anything but play dress-up and sit on his father’s knees (Gulliver McGrath). He also must balance his cabinet members, a congress as divided as the country itself and a possible peace delegation from the Confederates.

This Lincoln is an intellectual, often telling stories that either mesmerize or try the patience of those around him. These stories range from humorous personal anecdotes to interpretations of philosophy and Shakespeare. He tells these stories as a way to make a point, or maybe to understand his own thoughts on a subject.The film itself is structured quite like the stories Lincoln tells; ambling and moving from one storyline to another, from character to character. The film, like the stories, reveals something about Lincoln, if you have the patience to follow through to the end.

They say what makes a director great is what he chooses not to show. In this case the way Spielberg decided to reveal the death of Lincoln proves both unexpected and perfectly Spielbergian, but not overly romanticized. Really, it’s one of the most harrowing parts of the film, and not for the reasons one might expect.

Day-Lewis will more than likely receive an Oscar nomination for his towering performance, but there are several in this film’s flawless ensemble that deserve spots as well. David Strathairn gives a tremendous performance as Secretary of State William Seward, the straight man to Day-Lewis’s wilily Lincoln. Sally Field gives a fearless, almost savage performance as the oft-misunderstood Mary Todd Lincoln. There are moments in between the anger and accusations of real tenderness between Lincoln and his wife and it is these moments that stick with the viewer the most. Tommy Lee Jones gives his best performance in years as leader of the Radical Republican party and staunch abolitionist Thaddeus Stevens. James Spader gives another wickedly slick performance as a lobbyist for the 13th Amendment, though he is practically un-recognizably coiffed and mustachioed.

At one point in the film Lincoln asks a telegraph operator (Adam Driver of HBO’s Girls), whether he thinks people are fitted to the time they are born. He responds, “You maybe.” It’s hard to watch this film without knowing the outcome, without 21st century eyes. But the way Kushner scripts the debates in congress, it’s not too much of a stretch to see parallels with today’s issues of marriage equality. The Civil War Era is supposedly the most divided the country ever was, but the media would have you believe America is currently the most divided it’s been in the modern era.

Lincoln is an unexpectedly restrained effort from Spielberg, who steps back from the spotlight and lets his characters’ melancholy and humor carry the film, which may well prove to be one of his greatest to date.