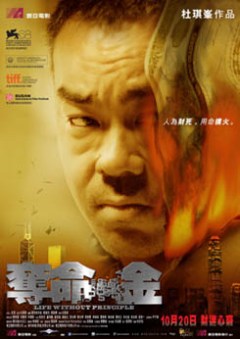 When do wants transform into needs? When does hope end up fueling greed? Stock prices mete out fates like the ancient gods of Greece, the country whose loan default is a catalyst for the turmoil plaguing the world in Life Without Principle. We follow several characters’ loosely connected plots: banking officer Teresa (Ho), Triad lackey Panther (Ching), and police inspector Cheung (Ren) and his wife Connie (Wu).

Johnnie To’s most internationally famous film, 2005’s Election, is often noted for its somewhat anthropological examination of a Hong Kong triad during its election process. There’s a similar perspective of observation here, presenting the environments and personalities at work, the details of habitat and hierarchy. The setup is slow before the film segues toward thriller mode, and one particular bank office scene can try viewers’ patience. Yet it is also a critical moment that illustrates the frustration ordinary people face when testing the waves of high finance. Here is another view.

“…to someone who has no taste for gambling at all (i.e. me), it may as well be a horror movie. The pensioner vs. bank rep conversation plays out in its entirety, in real time (though not as a single take), and it feels like the moment where you internally scream at the people onscreen to not go down into the dark basement where they heard the noise; infinitely extended in the banality of everyday evil.”

That reviewer also notes how legal and illegal activities blur and collide, fostering a free-for-all world where any type of  risk tempts downfall.

Mostly naturalistic acting and fillips of humor round out the social melodrama. Denise Ho is outstanding as the bank employee torn between desperation and decency, while Ching Wan Lau brings out likable qualities in a pathetic criminal who is tragi-comedically unable to refuse any call for help from his triad brothers. Major failures in communication became so involving that I gasped and wanted to grab the characters to steer them from potentially bad outcomes. Their ambitions are irresponsible but painfully relatable, especially for those who have witnessed or experienced split-second boom-and-bust in the past few years. Why wouldn’t you try for just a little more if times looked ripe?

Whiplash twists drawn from recent unpredictable global crises imply that even a deux ex machina element can crush hopes as swiftly as it raises them. Life Without Principle rises above heavy-handed machinations by focusing on the people affected, how they finally take responsibility and deal with the fates they are given.