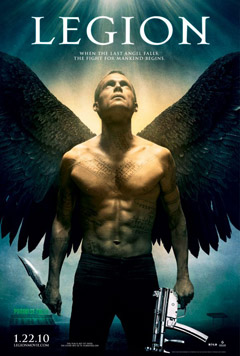 Legion is the nearly-Apocalyptic film telling the story of a day when God loses all faith in humankind and sends his legion – hence the title – of angels to destroy us. Why nearly-Apocalyptic? Because you will never see Hollywood releasing a film about the end of humanity in which humanity actually ends… so with that alone you know the outcome of the whole film. It also helps that the only angel to defy God, therefore one of the good guys, is played by Paul Bettany (A Beautiful Mind, Creation).

The film started off well with the fallen angel and the prophecy of the baby that would give God his hope back, until about 15 or 20 minutes into the film, when everything began going downhill. You could ask how anyone could make a film about the destruction of mankind by its very own creator such a dreadful – as in boring – experience.

You could start with picking on the characters. It’s not that we hate action flicks, but when you finish watching a film wishing all the characters that survived had been killed off, there must be something wrong with it. It’s not even like too many characters survived, in fact, many committed the stupid mistakes of getting themselves killed… typical horror film deaths.

If God is sending his army of angels to kill us, we want to see the main characters fighting for dear life because it matters. We wanted Bettany’s Michael to win because he wanted to save the baby, but we also wanted the mother of the baby, Charlie, to die already… as well as Jeep, the guy who is in love with her and seems to be less than bright.