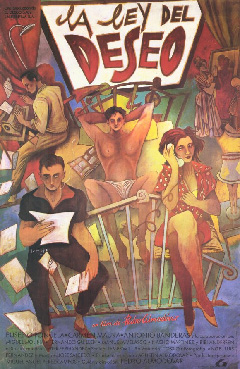 After the macabre sensual piece that was Matador, Pedro Almodóvar struck hard with what could be considered one of his most impressive early films: La Ley del Deseo.

Pablo Quintero (Poncela) is a famous director who is in love with a man named Juan (Molina). When Juan leaves him to travel elsewhere, he finds solace in the arms of the possessive and obsessed Antonio (Banderas). Pablo’s sister Tina (Maura) is experiencing romantic troubles of her own, all while raising a daughter and trying to make it as an actress. Her already complicated life becomes entwined in Pablo’s, tangling them all up in drama, sex, and murder.

Gorgeous photography and ridiculous eighties fashion aren’t the only treats the film has to offer, and as usual, Almodóvar holds nothing back when it comes to sex. The first scene alone proves this, showing us a young man removing his clothing and touching himself for an off-screen voice that commands him to do so. Adding to that, we have multiple sex scenes between lead Eusebio Poncela and a few men, including one very amusing one with Antonio Banderas.

The mixture of comedy, melodrama, and thriller makes La Ley del Deseo a curious piece, as it often feels a little imbalanced. Such imbalance in tone can easily be attributed to the film’s operatic nature and the treatment of human emotion, which more often than not is mixed and confusing. The raw sexuality and passion embedded in the film certainly helps you forget that at times, but the ménage à trois at the center of it all falls into a Hitchcock-style murder mystery that’s isn’t quite as engaging as the rest of it.

Murder and gay sex might seem like enough of an interesting combination already, both of which are frequent in Almodóvar’s films, but there is more here that actually stands out above that. Carmen Maura’s portrayal of Tina, a trans woman with a fascinating back story, is one of the highlights of La Ley del Deseo. While Poncela and Banderas both give fine performances, especially at bringing forth a strong sexual presence, Maura’s acting offers a strong emotional depth to the film that is much needed.

Not only is it a great stand-alone piece, but La Ley del Deseo could be considered the best starting point for those interested in exploring Almodóvar’s impressive career. As mentioned earlier, it features many of Almodóvar’s trademarks: a darkly sexual tale, prominent LGBT characters, colorful photography throughout the film, and even Antonio Banderas in a twisted role.

Those who have already experienced Almodóvar’s later films will likely find themselves even more drawn in than the average viewer, as it is always fascinating to witness the beginnings of what a director will base his entire career around. It may be far from his best work, but La Ley del Deseo is an entertaining piece of cinema nonetheless.