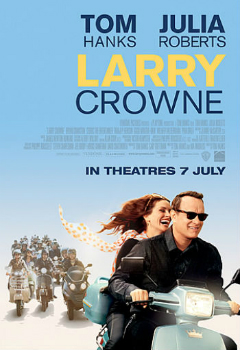 Tom Hanks stars as Larry Crowne, a working class hero that is devoted to his job. He is very good at what he does, but with the recession he loses everything because he does not have a college diploma. Doesn’t matter that he has worked for over 20 years at the same store — no diploma and you are out.

When their paths cross, they inspire each other. A lot of funny stuff happens and some love blossoms. It is cute, but a bit predictable. Hanks is adorable in his role as the meek yet ballsy character. It is a role he has done in the past and he has done it well. Roberts is the slightly misunderstood beauty, the woman that is smart but underestimated. They don’t have much in common but they make it work.

Then again, I don’t think I have ever seen Roberts have anything but amazing chemistry with her male leads.

Besides our leads, we have the other characters that are meant to give some comedic relief — like Hanks’ sidekick (Mbatha-Raw), a young, free-spirited girl who helps him become cooler, exposing him to new sensations and guiding him in his new life. Then, we have the sassy best-friend (Grier), and the slightly boring yet crazy economics professor (Takei) — who pretty much stole the show with his commentary and evil laugher.

I mentioned the word predictable, and that is exactly what the movie is — I won’t sugarcoat it. You sit down in the theater and you know that Hanks is going to come out winning in the end. That is all good. I guess the purpose of the movie is to give hope to everyone who has suffered as a result of the recession. I see that Hanks wants to inspire hope in people who watch this movie.

As cliched as it is, it is very charming and done with a glint in the eye. You can’t hate a movie that is so full of hope, albeit also full of predictability. Hanks does his “charming-average-Joe” really well while Roberts stuns everybody with her smile and they make quite a pair.

As feel-good movies go, it might not be the best, but it isn’t all that bad either. So for that reason, it is a movie you might want to watch if you have nothing better to do. Afterall, Hanks is a master of the feel-good movie. I left the cinema with a little smile on my lips and that is what counts.