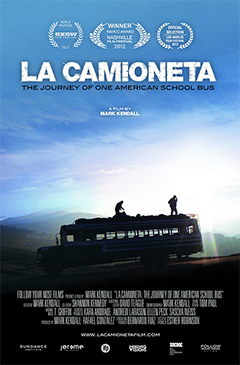 “When you die, your body dies, but your being doesn’t die. Your being, your energy, lives on inside everyone.” These words are a rather spiritual way to kick off a documentary about a school bus and yet somewhat fitting. La Camioneta: The Journey of One American School Bus begins by introducing the audience to a simple bus. It could be any old school bus, but one is chosen to travel from the US to Guatemala and undergo a massive transformation for the sole sake of being used for public transportation.

Director Mark Kendall’s documentary doesn’t so much tell the story of a school bus so much as it depicts the lives of all those surrounding the bus, as well as the conditions they live in. Life is anything but easy for the people who buy, fix, and travel on these buses through Guatemala. Their lives are plagued by bills and gangsters who threaten them daily.

His decision to use this school bus as a veil for his goals to explore Guatemala’s socioeconomic state is a thin one, often left aside for the sake of essentially performing an anthropological study on the people of Guatemala. He reaches far beyond the grasp of this sole American school bus that the film introduces at the start, investigating the way the police handle threats to other buses among other things.

As short of a documentary as this is, its pacing if often a bit off-putting, lingering a little too long on the mundane when the bus’ journey could continue. One scene of a worker simply sitting eating with his family lasts nearly two full minutes and contributes nothing to the film. Kendall constantly attempts to rise to a poetic level that seems out of place in a documentary like this, inserting scenery shot after scenery shot along, almost losing focus of his proposed topic.

This isn’t to say that his somewhat meditative direction doesn’t work well at times, contrasting the more grating portions of the film nicely. Those who paint and redecorate the buses for mass appeal are among the more interesting of the interviewees who participate in impacting the bus’ journey. Most of the commentary that comes from the workers whose lives are attached to this bus is informative, but it mostly serves to further push Kendall’s study of Guatemala’s socioeconomic state than anything remotely related to the bus.

As arguably messy as it is, La Camioneta‘s best feature is giving a fair look at the people whose lives depend on this school bus. There’s definitely an interesting and informative short documentary about social issues in Guatemala within this feature, but it’s hidden behind a thin guise of buses and poetic visuals that are just plain unnecessary.