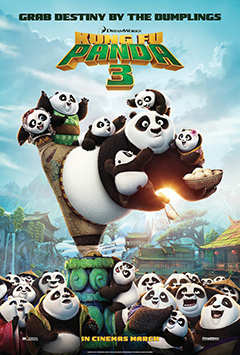 I’ve always been a Kung Fu Panda skeptic, but this one’s the best so far. Whereas the first installment of the series lacked depth in favor of that straightforward “Chosen One” Hero’s Journey with funny moments and sidekicks, and Kung Fu Panda 2 lacked these in favor of adding depth; the third one manages to balance both better and explains many of the things in the Panda-verse.

It’s time for Po (Black) and the Furious Five [Tigress (Jolie), Monkey (Chan), Mantis (Rogen), Viper (Liu), and Crane (Cross)] to finish their training with Master Shifu (Hoffman), who will retire to find enlightenment as Master Oogway (Kim) had done before. The latter finds himself in the Chinese Spirit Realm, where he encounters the Spirit Warrior Kai (Simmons), an old friend of his who is collecting the life force (known as chi/qi (氣, 气)) of other spirit warriors to return to the Mortal World.

Po will have to rediscover who he is, once again, as he meets the father (Cranston) we all thought was killed in the panda-cide, and Po sets out to master Chi to stop Kai from taking other warriors’ strength.

Kung Fu Panda 3 starts off with, probably, the flashiest animation sequence in the whole franchise — though shadow puppetry can still give it a good run for its money — only matched by that gorgeous introductory fight in Monkey King: Hero Is Back; and it continues with Kai fights that tend to have an element of metaphysical– there’s definitely a magical element if you’re not into the whole Chi thing. For those of us who enjoyed the previous one because of Po and his relationship with Mr. Ping (Hong), we get to explore some of Mr. Ping’s insecurities as an adoptive parent, when Li Shan shows up -almost- out of nowhere looking for his lost biological son… so the adopted Panda has TWO dads!

Anyway, for those who missed the humor of the original, you can’t get any more cuteness and laughs than a whole bunch of hippie dumpling-loving leisure-enjoying pandas… big and small, old and young, who make our protagonist realize that he hasn’t reached his full-panda potential. My only complain is that the resolution, the mastering of Chi was way too quickly — and Shifu may agree… of course he does.

Overall, though, I’m still debating whether I liked this one or the second one better, but given the better balance of themes and humor, I’m giving this the edge. The franchise (outside the television series or short films, which I haven’t seen) has been one of the most consistent ones.