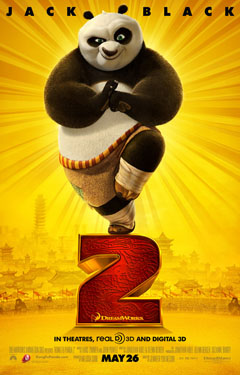 Whereas the original Kung Fu Panda lacked in substance and made up with laughs, Kung Fu Panda 2 contains heartfelt moments and scattered laughs — whether you like one or the other, it’s really up to you.

The film is simple and straightforward, so I’m just going to say that it chronicles Po’s (Black) road to inner peace as he learns where he comes from and accepts who he is. In reality, Kung Fu Panda 2 is more than an apt sequel. It’s got a very compelling introduction, almost a breathtaking sequence in shadow puppets style that works as a very precise way to build up our antagonist, the deeply scarred Lord Shen (Oldman), who is easily the best part of the film.

Let’s face it, while his free-spirited clumsiness and bad decision making was cute in his first few starring mainstream hits, a lot of people have grown tired of Jack Black.  In KFP 2, Black plays Po as almost his usual self even though our dear panda has been the Dragon Warrior since the last film.

The members of the Furious Five do get relegated to complete background characters, they are victims of the build up of Po and Lord Shen. Lord Shen is a peacock — yes, you read right — that took a wrong turn in his life and turned all Shredder on us with metal feather blades and all. His biggest goal is to take over China, but according to a prophecy (isn’t it always like that?) he is to be beaten by “something” that’s black and white. As all power hungry bad guys who receive bad prophecies do, Lord Shen sets out to get rid off anything resembling his foretold nemesis — so he exterminates the pandas… including Po’s parents.

So now we know why Po’s dad is a goose, and Mr. Ping (Hong) has easily the most heartfelt moments in the film. Though we see the horrible panda-cide, it is Mr. Ping’s relationship with Po that gets to us. When he sees Po back at the restaurant, gushes over Po not being fed enough because he’d obviously lost weight, and tells Po he should have let him know — he’d visit so he could make some stinky tofu. This panda’s dad is a goose, and this goose loves this panda straightforwardly.

I love Mr. Ping — and it’s not because I love roasted goose. I think he exemplifies the essence of the worrisome Asian (or Latin American) parent, who sometimes smothers us with questions about our diets, or if we’ve done our laundry. Those who call us once a week when we’re really far away from home, and receive us with open wings when we’re back.