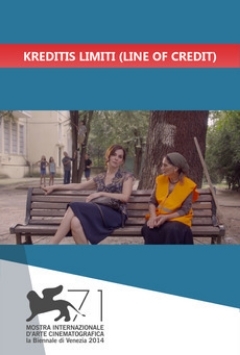 Georgian new wave? It may be a tad premature to refer to it as such, but based on films such as Rusudan Pirveli’s Susa (2010), Tinatin Gurchiani’s The Machine Which Makes Everything Disappear (2012), Nana Ekvtimishvili and Simon Groß’s In Bloom (2013) and, now, writer-director Salomé Alexi’s Line of Credit (Kreditis limiti), all feature debuts, there’s clearly something going on in this part of the world that’s worth keeping an eye on.

Interestingly, women directors are responsible for each one of these films. Alexi, in fact, is a descendant of a three-generation-long female filmmaker family. Her grandmother, Noutsa Gogoberidze, was the first female Georgian director, and her mother, Lana Gogoberidze, was part of the regional cinematic renaissance during the Sixties alongside the likes of Tengiz Abuladze and Otar Iosseliani, who, despite now being based in France, remains an influential figure for Georgian filmmakers.

The wry, sardonic humor Iosseliani’s films are known for is amply evident in the two Alexi efforts I have seen so far, including an earlier short called Felicità (2009). Moreover, similar to much of his work, these films are formally composed—she too has a knack for staging as much action as possible within her precise, clean compositions—tonally uniform, and socially relevant.

In Line of Credit, which is essentially a comedy of manners, Alexi takes as her subject Georgia’s recent financial crisis, which, according to a title card, caused an astounding 14% of the country’s population to lose their abodes and personal belongings between 2009 and 2013, with high-interest mortgage loans serving as a catalyst. The modern, post-Soviet Tbilisi she depicts in the film is brimming with loan sharks, pawnshops, and other predatory financial service providers. And the film’s protagonist, Nino (Nino Kasradze), a beautiful woman in her 40s, who once clearly belonged to an aristocratic family but now has to do her best to keep up appearances, is a perfect prey.

Line of Credit also echoes the work of Naruse Mikio with its materialist ethic; there’s hardly an exchange in the film that does not revolve around monetary concerns. But its low-key approach makes even Naruse’s relatively muted films feel dramatic in comparison. Having an attractive but no-longer-young woman as its center, who has to deal with any problems on her own because the men in her life are practically useless, is another element that recalls the Japanese master.

Nino, however, is far more credulous than Naruse’s women. She keeps borrowing from one source in order to pay off another, without much regard for the larger picture. When the employee of her family’s sparsely appointed café helps her out of a jam it is from the money that she had been stealing all along. The Gudiashvili painting Nino had been keeping as a last resort turns out to be a fake, with the original having been sold by her son to pay off his expenses. Alexi’s razor-sharp editing only helps emphasize the largely situational humor. Unlike her protagonist, this forty-something knows what she’s doing.

Kreditis Limiti is the featured film at the Filmatique this week, and will be available for streaming to US users for three months.