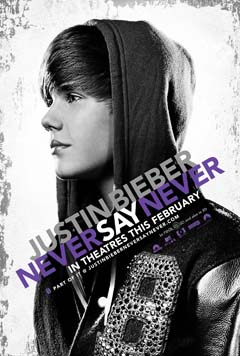 My name is Lindsay Penn, and I have Bieber Fever.

What I do have, however, is an unshakable fascination with pop idols. While others may look at Mr. Bieber as another pop culture flash-in-the-pan, I can’t help but feel these are the same people that look at stars and just see ordinary specks of light. What makes the stars shine so brightly? If we get closer, we may realize we’re approaching a violently burning flame, a wonder of power and energy, and we may even learn how much of ourselves is composed of the very stuff that fuels the stars. Fancy thoughts, I know.

Never Say Never is a good movie that could have been a great film. It was a pop culture exploitation— a Bieber propaganda piece that came dangerously close to being a fascinating exploration of the pop idol psyche, and the way that modern technology affects the time-honored tradition of teeny bop worship. However, Jon M. Chu, as talented as he is and how masterfully he stepped around the pop idol mystique to make an engaging film, was unable to reconcile the two conflicting concepts at hand. You can’t have the Bieber fantasy and the Bieber reality in one film, and the Bieber fantasy is what we are selling.

So how did he make this documentary engaging without losing the fantasy? He keeps us far away from Bieber. This film has no direct interviews with the pop tart himself. The whole film is comprised of home movies, behind the scene clips, performances, and interviews with people who know him. The Biebs only directly addresses the camera twice in the whole film.

Despite that, we are still able to extrapolate certain complexities and idiosyncrasies about who the hell this Justin Bieber kid is. The film tells the story of a professional with dedication to his work and his fans, but also that of a boy who is quite young, trying to balance his fame with his normal life. It also dances around the evidence that this Bieber kid, for lack of a better way to put it, ain’t normal.

Justin Bieber is missing a part of his brain, and I mean that in the most flattering way possible. Most people, including myself and most likely you, have a sense of self-doubt. We worry about giving people the wrong impression, we worry about coming off as a nerd, we worry about getting on people’s nerves. According to what I saw in this movie, Bieber simply doesn’t have that. At all.

This is a kid who was constantly willing to throw himself in the middle of anything, strutting his stuff on any stage that would take him, talking to strangers, marching right up to celebrities, and sometimes (perhaps even often) making a total fool of himself. He almost seemed like the kind of guy that would ask a girl out a hundred times, keep getting turned down, but never stop. He seemed like a nerd, if the term could be used in a more clinical or objective sense. But it paid off. Go Biebs.

The film left me with a sense of frustration. I came close to understanding something a lot more interesting than “omigod Justin Bieber is like so totally awesome.” What kind of human being finds success and happiness in this position? I want to know what flaws, what humanity, is behind that pretty boy face and fancy production design, but this film couldn’t give me that.

Absolutely worth watching, however. I couldn’t stop smiling the entire time.

by Lindsay Penn of Linzer Dinzer