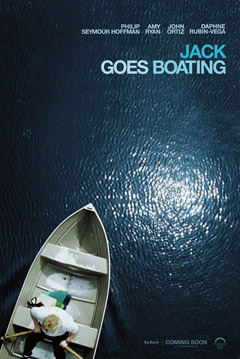 Jack (Philip Seymour Hoffman) is a forty-something bachelor who works as a limo driver. His co-worker and best friend Clyde (John Ortiz), in league with his wife, Lucy (Daphne Rubin-Vega), set Jack up with Lucy’s neurotic co-worker Connie (Amy Ryan). The chemistry between the four main characters is flawless, perhaps because Hoffman, Ortiz, and Rubin-Vega reprise roles they had in the off-Broadway play by Bob Glaudini, produced by Hoffman’s LAByrinth theater company and from which Boating is adapted.

Jack and Connie hit it off from the outset. He even promises to take her boating come summer and make her a gourmet meal that winter. Yet bumbling Jack is clearly unable to follow through on these promises: he’s afraid of the water and knows nothing about cooking. Clyde decides he’ll teach his friend to swim, so he can feel safe taking his girl boating. The male bonding scenes of Jack’s swimming lessons in a pool in Harlem are among the movie’s finest, both because of the excellent acting and David Knox’s underwater cinematography.

Clyde is less adept as a cook than a swimmer, but he enlists some help, albeit from an improbable resource: a pastry chef (Salvatore Inzerillo), nicknamed “the Cannoli,” with whom Lucy has had a longstanding affair. Whether maliciously (to rub Lucy’s nose in her unfaithfulness) or to show that he’s a sophisticated man of the world, Clyde even invites the suave fellow to Jack’s debut as a chef (“just for dessert”).

All the performances are truly excellent. The problem is that there are just too many pregnant pauses between (dull) lines of dialogue, leaving one feeling that Hoffman was indulging his performers (and himself). On screen, we can often see a character’s emotions instantaneously; we don’t need to study vacant stares for many seconds between lines of dialogue.

There are also some beautiful examples of thoughtful cinematography, especially the subjective, point-of-view shots through Jack’s goggles as he learns to swim and an exquisite and meaningful shot through a limo windshield as Clyde shares his marital woes with Jack. However, these skillful examples of camerawork are more than offset by sloppy, rack-focus shots, unmotivated handheld views, and too many talking (or even silent) head shots. Being a director involves directing the actors and the camera. As he matures as a filmmaker, perhaps Hoffman will pay more attention to the latter and build on his natural skills in displaying the performances of his fellow actors.

The performances are, of course, the best thing in Boating. It is not easy for an actor to convey a life’s worth of back story, but Ortiz and Rubin-Vega do it effortlessly. Their underlying attraction and love are obvious, but just as overt is their current state of bitterness and betrayal. Similarly, the parallel budding love between Jack and Connie is chiseled on their winter-beaten faces and graceless gestures, including Jack’s uneasy finger blasting during the couple’s initial sexual hook-up.

Ultimately, this is a fine first effort for Philip Seymour Hoffman—a small, simple story, with small, simple characters—and, reflecting the logo in the storefront, the film manifests his basic aim: to give us an effective, no-frills dramedy with strong performances. I hope that the next time Philip Goes Directing he’ll see fit to challenge himself with a more complex story, more multidimensional characters, and greater care for cinematic technique.