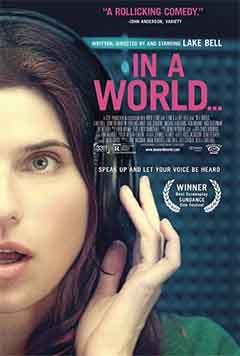 The voice of the trailer. We all know it, we’ve all heard it. The man with the voice of God: Don LaFontaine. In a world without this man, who will be the next person to step up to the plate and reclaim the phrase, “In a world…?” That is exactly what Lake Bell’s film In A World… explores.

Everybody wants to rule the world. In Carol’s (Bell) case, this is the world of the trailer voice over. Her father (Melamed), recipient of a lifetime achievement award for voice over work, constantly discourages his daughter from pursuing her dreams, choosing a rather self-centered young man (Marino) over her.

With support from her family and friends, she snags an one opportunity after another and soon becomes a competitor for the most lusted after voice over job in the business: using the phrase “in a world…” for the epic quadrilogy, The Amazon Games.

From the very start, it’s clear that Lake Bell has her sights set on establishing herself as a smart female voice in the comedy world. So much of her writing in this film is dedicated to presenting a feminist view point, with Marino and Melamed’s characters fully crafted to represent the male opposition. “The industry does not crave a female sound,” he says, but Bell knows better and her voice here is just what the industry needs.

Unlike other female-led comedies of recent years, In A World… doesn’t strive to show that ‘girls can do anything boys can do’ through abundant crudeness, but rather, simply plays with the traditional underdog and romantic comedy stories. It’s predictable, sure, but that almost certainly comes with the territory. Bell not only places an interesting female character at the head, but she toys with these generic plotlines and even pokes fun at the film’s own feminist ideas, with a great cameo from Geena Davis being a major highlight.

Above all else, what makes the film so entertaining is all of the colorful characters that populate the screen, and the fact that each of their stories actually manage to be entertaining. While it may seem like Lake Bell is at the head of everything, her co-stars (many of whom have been on Childrens Hospital with her) entertain just as much. Michaela Watkins and Demetri Martin in particular stand out among the rest, working with Bell in the best of ways, all thanks to some incredibly natural dialogue.

In A World… doesn’t have immense aspirations and it doesn’t need them. However light of a comedy it is, Lake Bell has established herself as a genuinely smart and funny voice for women in comedy with her feature directorial debut.