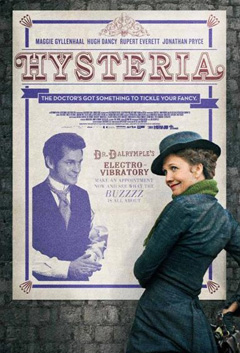 Sounds hilarious? Positively, especially when we meet Dr. Granville (Dancy) who is a forward-thinking doctor reading all he has to read to keep up with the new advancements of medicine, while many in the medicine field are thinking that cleanliness and germs are nothing but poppycock.

After losing his job, and many others before, Dr. Granville ends up at the offices of Dr. Robert Dalrymple (Pryce), who makes a really good buck treating women from the HORRIBLE symptoms of, what was then known as, “female hysteria.” The treatment was quiet simple, really, by just having these women sitting — legs wide open — and being treated down there by the magical, though tired, fingers of Dr. Dalrymple.

With eagerness to help and the desire to make a decent living, Dr. Granville accepts the job offer to help these poor women. Part of the perks of his job, he gets to live at the Dalrymple’s residency and share his meals with Dalrymple’s youngest daughter, Emily (Jones), who is the epitome of a proper English lady… unlike her older sister, Charlotte (Gyllengaal), who is loud and never shuts her mouth about women’s right to vote.

Nevermind that she spends all her time not doing what her father wants while spending all the money she gets helping the poor.

But overall, Hysteria doesn’t look above a made-for-tv movie — the treatment of the film, the way the story works, there’s nothing remarkable in it. However, that doesn’t take away from how entertaining the story can get.