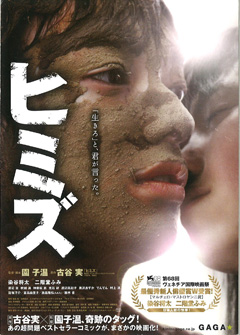 A high school virgin recites in the rain, strings soaring in defiance as she sermonises. A derelict landscape then soars past, strewn with the debris of disaster.

All this is just the calm before the storm, though, before everything goes to hell in a cavalcade of agro and violence in Sion Sono’s latest maelstrom out of Japan. A comment on his country in the wake of 2011, as much as an exploration of wasted youth. Himizu is based on a best-selling manga, but you’ll find no fantasy or respite here.

Himizu is all doom and gloom, pessimism and punch ups, so it’s no surprise that the plot gets lost in this mess, with the film pretty much an aimless missile for a good hour and a half, while strands are thrown out of nowhere at the screen — for example, the gallows being built for a forced suicide that never gets mentioned again, or the odd subplot involving the murder of a neo-Nazi.

Sono’s depiction of a Japan on the edge of collapse also falls flat, for whenever the focus changes from a collection of six survivors to the neighbouring city, we see life goes on, with running buses, busy classrooms, and clean city streets. Bar the odd knife-wielding maniac who shows up out of nowhere, we don’t get why our anti-hero, Sumida, decides to go on a Taxi Driver-esque campaign to clean up society outside of his own countryside patch.

Another misfire then from the mind behind Love Exposure, a film which got away with being overlong, messy and violent simply through a warped sense of joie de vivre now sadly missing from his output.