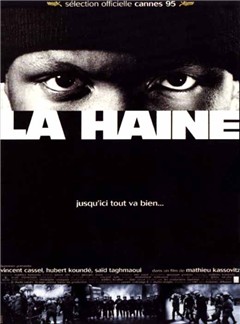 During a riot on the outskirts of Paris, the police have beaten an Arab teenager named Abdel into a coma, fuelling a fire of hatred among his three friends. The film follows a chaotic day in the life of Vinz (Cassel), a Jew who sees himself as a gangster ready to win respect; Said (Taghmaoui), an Arab that likes to joke around; and the passive African boxer Hubert (Koundé). The three friends walk around the suburb without jobs, no money and with few ways to amuse themselves except hanging out. Later in the film, we find out that during riots that took place a night before, a police officer lost his handgun in the ensuing madness, only for Vinz to find it. Now, with a newfound means to gain the respect he deserves, Vinz vows to kill a cop if his friend Abdel dies in the hospital.

La Haine, or Hate as it’s called in English, is French social realism at its best. Mathieu Kassovitz has created a raw, realistic depiction of a Paris in chaos, in which young people live in an oppressed world where they feel everyone is against them. Many times in the film, we can hear one of the characters repeating, “Heard about the guy who fell off a skyscraper? On his way down past each floor, he kept saying to reassure himself, ‘So far so good… so far so good… so far so good.’ How you fall doesn’t matter. It’s how you land!”

In Kassovitz’s film we find a society on its way down. The result is an explosion of scathing social commentary and dynamic storytelling. It is a cruel, realistic view of racism, police corruption, violence, drug abuse and misery. Kassovitz shows us a nervous narrative style that combines fiction with camera work that approaches the documentary. The film itself is technically impressive, made of sharp black and white with a lovely surface and a contagious energy in the images and cutting. The black and white cinematography is also very engaging and reinforces the depressing reality of the gray concrete suburb of a modern city like Paris.

Finally, La Haine is a piece of well made, well played, gutsy, constantly unpredictable and interesting art that still captivates. The acting is strong and the three youths who are the main characters provide very intimate portraits, especially Vincent Cassel, who plays Vinz. Here he makes a very intense and realistic role interpretation that fits the film well.

This is a film no one can afford to miss, a film that goes directly into cinema history and onto the list of the 1000 films you must see before you die.