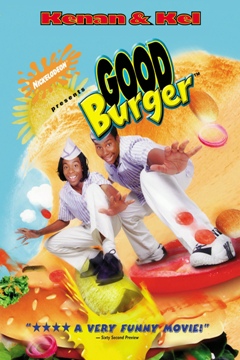 I could go on a diatribe about the destruction inherent in the mass consumption of fast food and the powers that govern our reliance on capitalism. I could even go on about how the underdog, against all possible odds, manages to prevail in the long run. But, let’s be real, Good Burger is just a ridiculous movie that framed many a childhood for 90s babies everywhere.

Dexter (Thompson), your average teen with average teen problems, finds himself the victim of the half-brained negligence of Ed (Mitchell), an innocent fool infused with West Coast sensibilities. While driving home in his mother’s car (without a license), Dexter almost hits a rollerblading Ed, resulting in Dexter getting in a head-on collision with his principal (Sinbad). He has no choice but to pay for the damages to both his mother’s and his principal’s cars. What a way to start your summer vacation.

Now, being an average teenager, Dexter has no real skills to offer. So he goes the route of all teens trying to score some cash for the summer: working at a fast food joint. He joins the ranks of new-age fast food giant Mondo Burger, only to get fired the very first day for mouthing off to the power hungry (and slightly demented) owner, Kirk — a man with a serious Napoleon complex. He decides to drown his sorrows in milkshakes at the floundering fast food restaurant across the street, the one and only Good Burger. There, the very cause of all of his summer woes, Ed, convinces their boss to take Dexter on as a driver. Meanwhile, Kirk’s Mondo Burger threatens to yank the remaining life out of Good Burger. Thus the beginning of strange and unlikely shenanigans.

A spinoff of the popular bit from Nickelodeon’s sketch comedy show All That, Good Burger may not be the most classic bit of 90s nostalgia; however, the movie still stands as one of the most ridiculous bits of cinema to come from the decade. The teenage bromance between Kenan and Kel is one for the ages, going down in the annals of television history is probably one of the most creative. It was PG-rated nonsense from a time when everything may not have been particularly innocent, but was always handled with kid gloves in order to give preteens and slightly older kids alike the chance to have their own inside jokes away from the obvious raunchiness of adult television.

More than just the connection between our two protagonists, Good Burger managed to give kids a bit of introspection, 70s pop culture (as in the Demented Hills dance number), and a lesson about the dangers of overindulging in the pull of consumerism — lessons we didn’t actually get until 15 years later, as seems to be the case with most things from our childhood. Though not an incredible film by any stretch of the imagination, it still stands up as a viable piece of simple comedy — a PG-rated version of Dumb & Dumber, if you will — that will always make me laugh no matter how dated the gags.