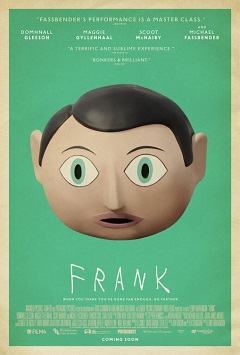 Strangely endearing, Frank is way more complex and dramatic than its premise.

Jon (Gleeson) is a rockstar wannabe. He tweets and he blogs, but he has no inspiration. His luck seems to change when he joins an eccentric band with an unpronounceable name, Soronprfbs. Led by the enigmatic and paper mache-mask wearer Frank (Fassbender), the band carries young Jon into a vortex of creativity, ludicrousness and musical nonsense.

Based on the article written by Jon Ronson about his time as a keyboard player in a band with Chris Sievey, whom the world knew as Frank Sidebottom, this film is a total cinephilic oddity.

Frank is both satire and praise to the non-conventional recording process of a music album, detailing the absurdity behind every decision and making it all extremely funny to observe. The pretentiousness of it all gets recorded and shared by Jon, who tweets, blogs and shares videos in hopes to find an audience to the peculiar band.  His ambition doesn’t get any kind of support from his fellow band mates, especially from neurotic Clara (Gyllenhaal), since she’s suspicious of his real motives. The problem is that they create art which is not within the commercial spectrum of music and they really don’t care about finding an audience, making it a challenge for Jon to actually promote their work. The tension of this issue fluctuates between extreme and mental artistic purity and Jon’s selfish desire for people to like the band, to sell out.

Everything seems light and quirky, just like an unusual musical with a neurotic theremin player. However, there’s a shift in the tone of the film that turns it into something more serious and with more depth.

Frank is in its essence, a study on human nature and mental illness. Fassbender’s character is perceived as some sort of musical guru among his band members, but in reality he is a troubled soul who is too fragile to be able to engage with the real world without using his big paper mache head.  He doesn’t use his head because he wants to become a cool rockstar, he uses it because he needs it to be able to live. It serves as his own fortress against the real world as it also serves him to connect with other people with mental problems like depression, anxiety or with suicidal tendencies.

Michael Fassbender steals the film as the charming and over-the-top singer, allowing us to witness his unequal acting ability. No other actor could have done what he did in this raw, vulnerable, hauntingly phenomenal performance. He perfectly revealed the melancholic and ill mind of the complicated Frank. Fassbender basically gave us another example of why he’s the finest actor of his generation.

Even though it begins as just another indie comedy film, Irish director Lenny Abrahamson skillfully takes us to a nuanced final act, making Frank’s real issues and motivations clear, exploring the character’s puzzling persona in aheartbreaking and moving way.

There’s heart and a disarmingly truth behind Frank’s big paper mache head, and it’s definitely worth your time.