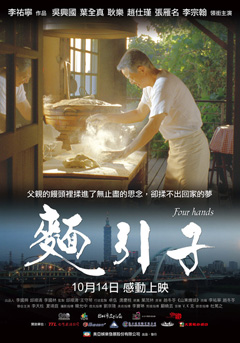 Though not strictly a movie about food for the Blogathon, this Taiwanese production has somewhat of a connection to food — as shown in the poster — but it’s not enough for me to include it for the event.

Four Hands is a movie about a family, three generations, across the strait. Though I feel the Taiwan/Mainland China relationship in the movie may have needed a little bit of explaining for general audiences to fully understand the distance in which these people had grown apart, Four Hands gets on with a quick historical setup: Houcheng (played by Wu in old age), returning to his hometown in Shangdong, is taken away by the army in 1949, leaving his younger brother, his whole family, and his wife, Zuning (Zhao), who has just given birth to his baby boy (later played by Geng).

Time passed by, relationships severed by political war. Houcheng, instead of returning to Shangdong, lived his life in Taipei, having a daughter (Yeh) that now has a son (Chang), but Houcheng always waits for a letter that will never come. He wakes up every morning to make mantou [1], as per his family’s tradition. The flour matters as much as the enhancers, and as much as kneading the dough does — “When kneading dough, never save labor. The more vigorous, the plumper.” I’m sure there’s a teaching in human relationships in there somewhere.

In his old age and filled with regrets, Houcheng goes back home to Shangdong just to encounter a lot more unresolved business with his now grown son, who begrudges the absence of his father. A lot of drama ensues, heads are bumped, and a lot of tears are shed.

That’s one of my main issues with Four Hands, better explained with the making of mantou itself — “When making mantou, the dough enhancer matters. Too much, it goes sour; not enough, it’s tasteless.” In the case of the movie, Four Hands has too much melodrama, so much overacting that makes for an uncomfortable — even if felt — movie experience. We understand the difficulty of the situation Houcheng had to go through, the results of the decisions he had to make, but making faces while hitting yourself on cue to burst into tears while seeing the brother you’d never thought you would see ever again is… “too much.”

Maybe it’s a generational thing, but I just don’t see Chinese people being this overly emotional in front of people.

In any case, the movie doesn’t only stumble with the sentimentality, but it also lacks a little bit of cohesiveness. At times it feels like it wants to say all these different things about regret, about forgiveness, about understanding, about home… though Four Hands seemed a little too long (it would’ve been perfect as a 40-minute short about a man returning home), two hours seem to be hardly enough to tell the story that spans 60 years.