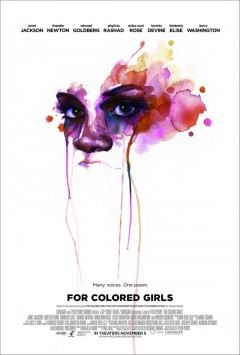 The film tells the story of eight different women who are having troubles of their own, and end up meeting one another.

Crystal (Elise) has two little kids and an abusive husband.

Tangie (Newton) loves sex, while people — including her religious mother (Goldberg) — look down on her for it.

Yasmine (Rose) is a dance teacher that puts her guard down.

Kelly (Washington) is a social worker who’s trying to start a family.

Nyla (Thompson) is Tangie’s sister and tries to live by her mother’s religious expectations.

And Gilda (Rashad) just watches over them.

For Colored Girls is a mess of a story that has so much drama going on that we don’t really know what it’s about in just one sentence. Add to that overlapping dialogue in flourished prose, we barely knew what was going on.

However, it is a pity that with Perry’s self-serving “I can do everything” attitude, he couldn’t bring himself to call other people to work with him to bring For Colored Girls home. Because the film contains some very fine performances by Kimberly Elise, Kerry Washington and Loretta Devine, it’s a pity that they’re getting lost in the shuffle because we hate Perry so much.

One full extra star for the acting alone.