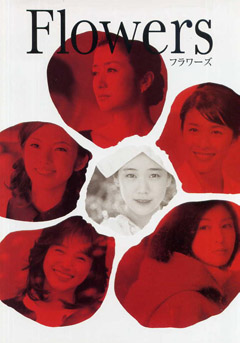 First things first — yes, FLOWERS is a complete Chick Flick with a saccharine title, and maybe a bit of an old-fashion ending. However, it’s all in the context of a film, which is set in different eras starting with the 1930s, and moving on through the 60s, 70s until our day and age through three generations of women.

If you can get pass the no Girl Power movement — which I’m usually giddy for — you’d be surprise with FLOWERS.

Like I said, the film starts in the 1930s when Rin (Aoi), is set to marry a man his father chose, but she refuses to because it wasn’t her choice. She decides to do what a sensible girl would do, run away the day of her wedding.

It also tells the story of Kaoru (Takeuchi), Midori (Tanaka), and Sato (Nakama) — three sisters going through their own ordeals with love and marriage. And finally links them to Kanna (Suzuki) and Kei (Hirosue) who have to deal with their own present-day issues.

Though FLOWERS is, essentially, a film where women get married and have babies, it has more to offer under its saccharine skin. It is especially on point with Rin’s talk with her own mother, where she asks her about the marriage with her dad. It doesn’t matter if Rin’s mother chose Rin’s father or not, it was a tough decision, but she had to do it… and because of that she had Rin and her siblings. These women had to make choices, they choose to live on, they choose to accept their lives — some of us may not like what they chose, but its the character’s choice.