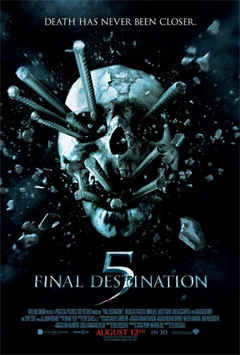 Everyone who has ever stepped foot into a Final Destination movie has been reminded of the unfortunate fact that you can’t cheat death. While we all know the inevitability of death, the films aren’t exactly gentle with their reminder that our time will come — regardless of how much we try to escape or postpone it. While Final Destination 5 escapes being as much of a joke as the fourth film, it still tells the same old story without realizing what the fine line between comedy and horror is.

Sam Lawton (D’Agosto) is about to embark on a retreat with his co-workers after an abrupt break-up with his girlfriend Molly (Bell). While on the bus ride to their retreat location, the bridge that they are crossing begins to collapse due to construction and chance winds. After what seems to be a reckless and unsuccessful attempt at escaping death, in which all but Molly die, Sam awakens to find that it was just a vision and they are seconds away from crossing the bridge. With a little bit of luck, seven of his co-workers join him in running off the bus and they escape the fatal incident for everyone on the bridge.

As with the other films in the Final Destination series, our young survivors now risk the fear of death coming back to get them because they cheated it. In the same order that Sam saw them die in his vision, his friends and co-workers begin to die in the strangest ways. With tensions already heightened from the lingering chance of death, Peter (Fisher) hears that if he takes the life of another he shall receive a reprieve from death and spreads the information between the other survivors. This leaves our remaining survivors to not only face death itself, but each other as well.

Final Destination 5 doesn’t take itself seriously. Most horror films lately have been delving into a world where comedy seems to be taking over, and this one is no exception. Even the opening credits — featuring a montage of murder objects smashing through glass toward the audience — falls into a ridiculous repetition within the first minute. The deaths, however original some might have been, also bordered on comedy more than once. Luckily enough, some of them did actually turn out to be surprisingly misleading and impressive — regardless of just how implausible they were.

When it comes to the performances in the film, there isn’t much to say — positive or negative. It is pretty much average acting all around, nearly jumping over that fine line between mediocre and bad acting. As previously mentioned, the deaths bounced back and forth between creative and downright stupid. When it comes to scares, not many existed unless you consider squirming in your chair at acupuncture needles or laser eye surgery gone wrong to be scary.

This is not to say that everything in the film was unappealing though. Anyone who has seen the first few Final Destination movies will be pleasantly surprised to find many small nods towards the previous films. But the most fantastic part of the film is without a doubt the finale — tying the fifth film in this series with the others in a marvelously unexpected way.

While Final Destination 5 comes nowhere near a good movie, it does have certain surprises and will appeal to anyone looking for some gruesome entertainment. For those looking for something better, you’ll have to wait and see what the rest of this year’s horror films have in store.